Basement Transmissions is About to Go Hard

VOTO turns BT into a nightclub at Hard City show 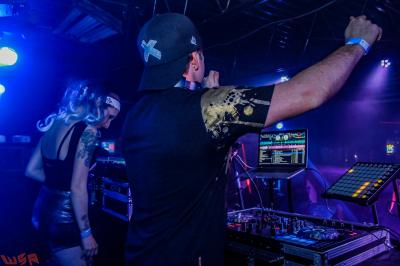 Are you ready to "go hard?" VOTO (Noah Voto) sure is as he prepares to turn Basement Transmissions into a nightclub at his Hard City show.

"Everyone planning on coming to Hard City is in for one of the best shows you have seen in Erie, PA," voices VOTO. " I personally want nothing more than to make sure everyone has the best time they have had in Erie and I know with the help of my team we will always provide the best quality show."

VOTO has been DJing for eight years now and has excelled in the EDM music scene, working with Cumulus Entertainment in Cleveland, Ohio and just recently performing at the popular Lost Lands Music Festival. His style of music can be described as hybrid trap along with other varieties of dubstep and EDM. VOTO, who is an Erie native himself, will bring to his hometown a night of EDM and hip-hop music performances, live painting, clothing design, vendors, professional lighting, and most importantly, dancing. "I strive to bring Erie the best quality EDM shows you'll see."

The night will include performances from VOTO, with support from Hekate (Krystan Pencil), Profound (Jarrod Groves), DJC DUBZ, Brandi FRESCO Carlini, and Bass Bandage. Beyond the musical performances, there will be guests from Flat House Press, Dom Greco Glass, Hazey Daisey Creations, and Hippie Trap Movement. Live art will be done by AbstractClairvoyance. John Paolella, owner of Fryman's Weiner Shack food truck will be on hand for the evening (as well as photos by Drone2You, so make sure to strike a pose).