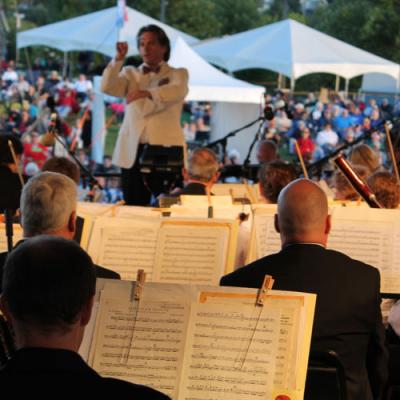 What can you say about 2013? It was one of those odd little in-between years jammed between big, splashy years. It was the year of bureaucratic messes – like Healthcare.gov – layoffs amidst a slowly recovering economy, mergers, renovations, and local elections, which no one seems to participate in anymore.

But even if there's no new President or another Olympic Games or mass protests in the street, important, strange, and watershed events happened that'll shape Erie for years to come. Here are our favorites:

Perry 200. Last year was the 200th anniversary of the Battle of Lake Erie, so the Jefferson Educational Society got together dozens of organizations and people to underwrite a two-year-long commemoration for Oliver Hazard Perry's thrilling victory over a British fleet. While the outcome of the war was dubious – we ended up with Detroit, and Canada with free health care – the celebration was anything but.

Choral groups, musicals, fishing competitions, history classes, a memorial service, Fourth of July fireworks, and, of course, a big honking parade. While we're not sure that it was really "an occasion for the city to reinvent itself," as Perry 200 chair William Garvey said in these pages (seems to us investments in infrastructure, education, and jobs would do a helluva lot more than parades to remake the city,) it sure was fun.

Destination Erie. Destination Erie is a plan. That's right, a plan. But not just any ordinary plan, it's a multi-million dollar plan funded by a federal grant and steered by the Erie Regional Chamber to map out a long-term growth strategy for the region.

What could possibly go wrong? Well, for starters, in October, Wallace, Roberts & Todd – the lead consultant for the project – was summarily dismissed for a lack of "passion," according to then-steering-committee-member Barry Grossman. Not long after, Grossman himself quit the project.

All of this followed an August letter to the steering committee from Erie Mayor Joe Sinnott, who wrote that the plan process "do[es] not currently serve the community for which this project was designed to benefit." Given that this shake-up feels like the mutant offspring of a good old-fashioned area power struggle over the dollars and direction of the city's future development, we can't help but admire the mayor's cryptic comment.

GE layoffs. The writing was on the wall. GE had built a union-free assembly plant in Texas, and GE Transportation last year abruptly moved its headquarters from Erie to Chicago.

In April, the company announced it was going to cut 950 jobs in Erie and move the work to Texas. After summer-long negotiations with the union representing plant workers, GE finally came up with a proposal the union couldn't accept, and talks fell apart.

The first round of cuts came down in November just in time for the holiday season, one 30-year veteran of the plant hanged himself at his workstation after receiving his pink slip, and GE saved itself $10 an hour for every job moved to Texas.

Tall Ships Erie. "Erie was born in a historic and singular summer," I wrote back in September on the anniversary of the Battle of Lake Erie, "one in which our city built a fleet of wooden ships and sent it off into danger."

To mark that event, Erie hosted a five-day tallship festival at the Maritime Museum and Bayfront Convention Center, and nine ships – highlighted by the steel-hulled, three-masted Sorlandet – paraded into the bay and docked to receive visitors. It was a raging success: the event raised nearly a half-million dollars for the Niagara League and the Flagship Niagara.

The worst thing you could say about the festival was that some of the lines to see the ships were staggeringly long, with waits of over an hour for a 15-minute tour of a ship – but even that was a mark of the festival's success, as more than 80,000 came to the Erie's Bayfront to attend, nearly a third more than expected.

The Millcreek School District. Millcreek's year started with an $8.8-million deficit in its school district budget and the mysterious resignation of Superintendent Michael Golde, and it only got worse. The district had already spent $1.9 million more than it had, and was still struggling with the 2012 revelation that Golde had improperly moved $5 million from a capital funds project to the general fund without informing the school board.

Then in July, the State Auditor General's audit of the district found "serious management and fiscal problems," and the report was passed on to the State Attorney General's office for possible investigation. One of the revelations of that audit was that the district allowed Otters players to attend McDowell High School tuition-free in exchange for tickets and business perks. Meanwhile, new superintendent Bill Hall closed Ridgefield and Vernondale elementary schools and is planning on selling one of them to make up for the more than half-a-million-dollar shortfall in the district an October audit discovered.

In short, it's a big tangled mess that keeps on giving. Bill Hall's leadership and the election of two new school board members – Donna Reese and John Pitzer – offer some hope to the beleaguered township, but it says a lot that Erie residents who stuck it out through their own school budget crisis are now relieved they hadn't fled to Millcreek.

Local elections. The year also brought us interesting county elections. The key word this year is "turnover." It was the year of the challenger, as two county council seats and the County Executive's Office changed hands in contested primary elections.

The big race was, of course, for county executive as former U.S. House Representative Kathy Dahlkemper ousted incumbent Barry Grossman in the May primary. Many of us wondered why Dahlkemper needed to challenge her fellow Democrat Grossman when, by most accounts, he had been doing a fine job, but we admit that having two good candidates on the ballot is far too rare.

In the county council, Andre Horton became that body's first African-American representative after defeating 20-year incumbent Joe Giles in the primary, but his biggest challenge was Edinboro University of Pennsylvania art professor Lisa Austin, who finished a paltry 10 votes behind Horton in May, and came in a close third as a write-in candidate in the General Election.

But perhaps our favorite county council result was the victory of 31-year-old Montana-born army vet Jay Breneman, who offers something Erie government sees too infrequently: youth, ambition, and ability.

In any case, Erie has apparently tired of seeing politicians turn elected offices into lifetime appointments: not only did several incumbents get kicked to the curb, but county voters overwhelmingly approved of term limits for county council and county executive, 85 to 15 percent. That result also identified the worst election prediction in the books; Michael Federici, Mercyhurst Professor of Political Science, in an October Erie Times-News report predicted term limits would fail. "There's a general prejudice against term limits," explained the professor. Oops.

Honorable mentions. We say "good riddance" to the McBride Viaduct, praise the Tulio Arena renovations blossoming into the Erie Insurance Arena, congratulate the Erie Philharmonic on its 100th anniversary, watch with increasing disquiet the Bayfront hotel wars, and cackle with pleasure as Gov. Tom Corbett's approval ratings flush down the toilet.

But perhaps best of all, we eagerly count the hours until we can go down to Lavery's and quaff our next Liopard Oir– the brewery's Great American Beerfest gold-medal saison. Lavery's opened its pub and won the medal in 2013, and we all can thank Erie's fortune for both.