2020 Monolithic in Its Challenge

But Erie demonstrates resourcefulness, resilience to carry on 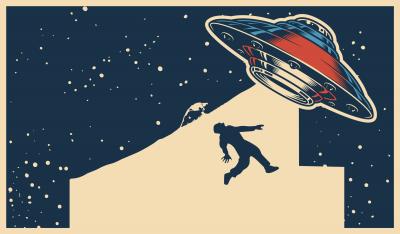 Nick Warren/DGIM studio
Even before mysterious monoliths began surfacing around the world, life this year had felt alien. But despite historic challenges and disruptions to our status quo, Erieites were among the human lifeforms who found ways to adapt and persevere during what some may call 2020: A Suck Odyssey.

So...what y'all wearing when the aliens get here? Surely you've heard about all the monoliths popping up lately — the tall, shiny columns shaped like Toblerone bars that have been spotted in Utah, Romania, California, and Texas? Well, that seems to me like a sign they'll be here any day now, so at the very least we'd better be wearing a smile and can-do attitude — because after this latest round of shutdowns, many of us may very well be looking at our next employers.

Of course, I needn't remind you to do your smiling from at least six feet away. This COVID-19 deal's still dragging its feet like an old mule with a bellyful of Railbender, and Yahweh Yahweh Yahweh (as of this year, the name of an actual Erieite) only knows what kind of bugs these outworlders might be carrying. Hell, they might even be bugs. At any rate, remember to be courteous. Good morning, Zanaglorp. I gotta say, I just LOVE what you've done with your mandibles.

It is with some concern that I write this, because as you and I both know, 2020 hasn't exactly been our best showing. At times this year, our behavior as a species could be described as counterintuitive and counterproductive — what with all our bickering and in-fighting over pretty common-sense issues like "Who has the right to stay healthy?" and "Who deserves to be treated like a real person?" And to Zanaglorp or Zeebleebop or whatever alien overlord is making the executive decisions, that would seem to be quite the indictment. Why shouldn't they just zap us all and start over tabula Roswell?

Although I can only speak for our tiny corner of Pennsylvania, I'm going to do my best to argue that they absolutely should not, but y'all gotta back me up. If you felt jilted when The Temptations and Four Tops canceled their Warner Theatre gig back in January, imagine how you'll feel when the Xergloggians (or whoever) cancel Earth. If you're able to — and I hope you are — take a few deep breaths with me and let's run through this together.

Column A: Please, We're Begging You, Zap Us Now

I'm going to be real with y'all, there were a number of stories to emerge from our area this year that would have any sensible sentient being scratching their head(s).

Although these petty misdeeds are certainly to be frowned upon (or however the aliens might express disapproval — acid drool or perhaps inflating some kind of indignation pouch?), they are nowhere near as contemptible as what transpired on the evening of Saturday, May 30. That night, a peaceful protest of police brutality in the death of George Floyd devolved into a full-scale riot, damaging several Downtown Erie businesses and injuring several people. Perhaps the ugliest and most indelible moment occurred when a riot control officer kicked unarmed, seated 21-year-old Hannah Silbaugh to the ground — a visual circulated widely in the aftermath.

It would hardly be the last unsightly scene from a year fraught with social and political tensions, as racist, sexist, homophobic, and transphobic sentiments bubbled to the fore. A public park vandalized with racial epithets. Highly disrespectful, sexist comments made during a Erie City Council meeting. Numerous insensitive memes and remarks made at the expense of the very capable Pennsylvania Secretary of Health Dr. Rachel Levine (a trans woman).

If this was all we had to show for ourselves, we'd be in trouble. But thankfully for us and our molecular constitutions, we have many more examples of good that should spare us from any potential disintegration rays.

Column B: On Second Thought, We'll Keep Our Molecules, Thank You

Despite all the evidence of self-sabotage I've presented so far, here's why I'm hopeful we (hypothetically) won't be vaporized.

Well, this list is not exhaustive, but I think it's a good start. If nothing else, it proves we generally do care for one another and are making strides toward a better and more inclusive future. Yes, we've done some stupid things out of boredom and frustration — such as illegally selling spiked slushies at a North East campground and converting a dried-up Water World at Waldameer into a private skatepark — but hopefully that will subside once our public lives can resume safely.

Once we wise up and do everything we can to make that happen, I feel the outlanders will find our diverse array of dining and entertainment options much to their liking — art, theater (not just the streaming kind, although ours have done a great job with that), live music, pro sports (the SeaWolves are here to stay!), indoor surfing, ax throwing, and even curling. If these activities are too primitive for their potentially overswelled craniums, at least we will have demonstrated initiative.

And that deserves a pat on the back with a warm tentacle.

Matt Swanseger is generally dismissive of conspiracy theories except in those situations when they provide a convenient narrative framing device. He can be reached at mswanseger@eriereader.com