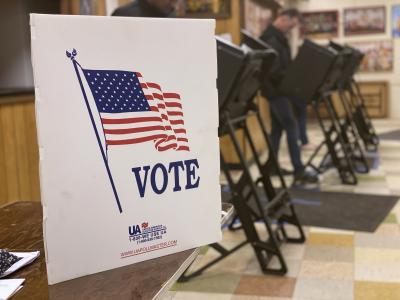 With a small number of mail-in ballots still to be counted, the primary elections are, for the most part, settled.

It seemed that one of the most significant races would also be the closest, with Dr. Tyler Titus narrowly defeating Carl Anderson by a margin of 208 votes at the time of this writing. They will face off against Republican Brenton Davis for the seat left by current Erie County Executive Kathy Dahlkemper.

The other big local seat remained unchanged, however, with incumbent Erie Mayor Joe Schember receiving the nomination in a landslide, receiving over 74% of the vote. Challengers Tom Spagel and Sydney Zimmermann received 1,836 votes and 848 votes respectively.

Schember will run unopposed in November. Coincidentally, he received the most amount of write-in votes on the Republican ballot as well, with a grand total of seven write-ins.

For Erie City Council, the incumbent (and regular Erie Reader contributor) Liz Allen walked away with the most votes, sharing her victory with Democrats Jasmine Flores, and Maurice Mo Troop. The fourth and final slot on the ballot would see a volley between Elspeth Kate Koehle and Chuck Nelson. The vote tally 24 hours after the election saw Nelson ahead by 33 votes (at the original time of this writing), with further counts having Koehle lead by 12 votes. Currently, more than a week after the elections, Nelson retains the lead by 25 votes.

They will face Republicans Greg Brown and Shawn Lyons in November.

For Erie County Sheriff, Chris Campanelli won out against Anthony SanFilippo for the Democratic nomination by a more than three-to-two margin. Campanelli will face Republican Brian Shank in the general.

With Erie County being a Democrat-leaning area, it's safe to say that some of these races can be all-but called, as landing a nomination essentially gives Democrats a greater likelihood of victory. Low voter turnout, combined with straight-ticket voting is often enough to clinch spots just outside the spotlight.

This likely won't be the case for some races, namely Erie County Executive, with Titus and Davis representing very different sides of the political spectrum.

Though it of course goes without saying – as we've slowly learned – that anything can happen. As each primary victor moves their eyes to the general election on Tuesday, November 2, campaigns will continue to ramp up, rallying for your votes.

Turnout is paramount in elections like these. Voter turnout sat around 27.6% for Democrats (23,859 voters) and 29.7% for Republicans (19,882 voters). Since there were ballot questions during this primary, registered Independent voters able to participate in Pennsylvania's closed primary system. In Erie County, 1,800 voters who were neither a registered Democrat or Republican voted during this election.

Similar to the 2020 election, Democrats were more likely to use the mail-in ballot option, with more than 7.3% doing so, while only just over 2% of Republicans did the same.

In all of Pennsylvania, voters chose to vote "Yes" on all four ballot questions. The first two opted to strip the Commonwealth's governor of emergency powers (like those implemented during the pandemic), with AP reporting that these two questions received a "Yes" response to the tune of 54 to 46 percent. Question three, regarding rights based on race and ethnicity, received a 71% "Yes" vote, and the fourth, regarding Fire Department and EMS loans, received 72%. For the first two questions, however, Erie voted "No." The first received 962 more "Yes" votes (a 0.019% margin), and the second received 1,013 more "Yes" votes (a 0.02% margin).

Statewide, Kevin Brobson won out over Patricia McCullough for the Republican nomination for Justice of the Supreme Court, though in Erie County, McCullough received more votes than both Brobson and challenger Paula Patrick.

Similarly, when it came to Erie County, Jill Beck received more than two-and-a-half times the votes as Timika Lane (more than doubling the vote totals for Lane and challenger Bryan Neft in Erie), who won the contest statewide by a more than 6% margin.

This is a developing story, and the numbers given reflect those at the time of this writing.