Despite devastating blow of pandemic, county shows signs of recovery 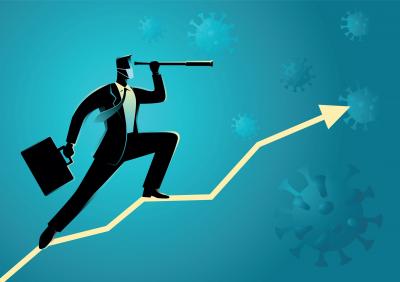 As we swept into 2020 things were, well, status quo. The Erie economy was plodding along with nominal growth, year over year, as it had been for much of the past decade, but there were positive trends on the horizon. The highlights included hundreds of millions of local dollars being pumped into downtown development, emergent investment opportunities in designated areas throughout Erie County, and a significant medical research partnership between UPMC Hamot and Penn State Erie, The Behrend College.

2019 ended with an annual total employment — those who were working or looking for work — of more than 128,000 people and an annual unemployment rate of 4.6 percent, according to the U.S. Bureau of Labor Statistics. The figures weren't record-setting but they were constant, and they reflected the local economic picture for the previous decade, with few variations.

"I think it's safe to say that things were pretty stable," says Dr. Ken Louie, director of the Economic Research Institute of Erie at Penn State Behrend. "That's not to say that we were growing at a rapid clip, but we were moving along at a fairly stable pace of activity."

Little did anyone anticipate that the first four months of 2020 would be one of the most challenging periods in American history, and the road through 2020 would be long and unpredictable.

The first case of coronavirus was reported in Washington State on January 20, the same day that Dr. Anthony Fauci announced that the National Institutes of Health were already working on developing a vaccine for COVID-19. Over the next two months, coronavirus cases spread across the United States and on March 6, Pennsylvania Governor Tom Wolf announced the state's first two confirmed cases in Delaware and Wayne counties. On March 13, all Pennsylvania schools were closed with most retail, restaurant, and corporate businesses following suit as part of a statewide shutdown just three days later.

While many employers transitioned to work from home options for employees, others paused or closed permanently amid the uncertainty of the moment. By the end of April, Erie County had lost approximately 26,000 jobs and unemployment was nearly 17 percent.

"The labor force has been shrinking and that contraction was accelerated by the coronavirus," Louie says. "Just over 20 percent of the jobs that existed in January were gone by April. That's a pretty steep decline."

Some sectors weathered the pandemic better than others. Firms performing financial activities retained most employees and professional and business services shed approximately 600 jobs between January of 2020 and January 2021, a mild change by comparison with harder-hit local sectors like retail, leisure and tourism, which accounted for approximately 15 percent of all jobs lost during the pandemic.

In the first quarter of 2021 the Erie economy began to rebound, recovering 61 percent of total jobs lost to the pandemic. Nevertheless, our progress remains just behind the U.S. economy, which has recovered 63 percent of all jobs lost during 2020.

"There's a little bit of good news in that as well," Louie says. "The retail sector in Erie actually has been doing very well. It has recovered pretty much 100 percent of the jobs that were lost during the pandemic."

The retail sector is one of the few that continues to outpace the national average for that sector, which hovers around 84 percent.

Manufacturing continued to struggle throughout 2020, losing approximately 1,700 jobs — or 1.5 percent — to the pandemic and only recouping about 18 percent of lost jobs. Nationally, the U.S. economy has recovered over 63 percent of manufacturing jobs. This trend reinforces an ongoing decline in manufacturing throughout the region. Only Wabtec, the region's largest manufacturer, remains among the top 10 employers in Erie County, according to reports from the Pennsylvania Department of Labor and Industry, although advanced industries, which tend to be smaller, more tech-driven firms compared to traditional manufacturing, continue to diversify and stabilize the region's manufacturing sector.

Emerging from the pandemic, every school district and municipality in Erie County, including the county government, will receive nearly $300 million combined from the American Recovery Plan and potentially more money from the recently announced Biden Administration national infrastructure package. These are transformational funds that have the potential to accelerate the post-pandemic recovery, in addition to creating new pathways within the local economic landscape. It's a once-in-a-generation opportunity to refocus regional attention on charting a course for the future of a community that has shown continued resilience in the face of hard times.

"I think even before the infrastructure package the money from the rescue plan already has the potential to do a lot of good for this community," says Louie. "I'm looking forward to wise and effective decisions in terms of using that infrastructure money and I think it can literally be a significant positive addition to the local area."