The Bayfront Maritime Center is bringing this event back by popular demand. 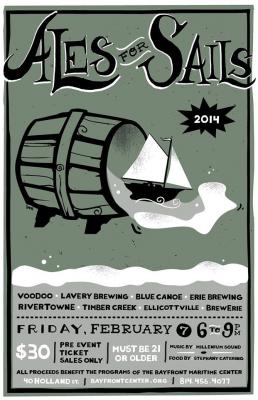 Rich and Amy Eisenberg are just trying to get the 16-year-old name of the Bayfront Maritime Center into the Erie community. Last year, Ales for Sails made its debut at the BMC, and this year, Eisenberg, the executive director of the BMC, is making it his mission to ensure that attendees not only have a good time at the fundraiser, but also leave with an unforeseen knowledge on what the BMC is all about. The BMC is a waterfront campus that educates a variety of community members, including at-risk teenagers and those with disabilities. The Ales for Sails fundraiser benefits BMC programs including EASE, Pennsylvania's only adaptive sailing program, and Project SAIL, an after school program for local high school students. Although Ales for Sails is only in its second year, tickets are selling quickly for this evening of beer tasting, appetizer sampling, boat shop demonstrations, door prizes, a live DJ, and plenty more. So far, it looks like the Eisenbergs' mission is a success.

Ellie Hartleb: Where did the idea to do Ales for Sails come from?

Rich Eisenberg: [Last year] we were building our first Saint Ayles Skiff and we needed money for some of the other parts of the boat. The original name was Ales for Saint Ayles, but after Christmas we shortened it to Ales for Sails.

EH: What are three reasons why someone should come to this event?

RE: To support our effort here to help local kids. We've worked with every kind of kid in this community and some are the ones who are struggling to succeed in school. We've had a great bit of success.

It's a whole lot of fun. Last year, everyone was having a ball.

It's a bargain—eight breweries, and a bunch of types of beer and a lot to see and do.

EH: How would you describe the atmosphere at the event?

RE: It's a winter celebrations and an open house. A lot of people that came had never been to the Bayfront Maritime Center, and just about everyone is pleasantly surprised to see the things we do in this waterfront campus. It's a great way for people to spend a great evening and so something about their cabin fever.

RE: Immediate goals would be to raise awareness for the Bayfront Maritime Center and showcase our beautiful campus. [Another goal] is to share the vision of what it could be like, here in Erie, with rowing programs and adaptive sailing programs, open to everybody. It's also good for us to raise our volunteer staff and find people with skills because Erie is full of people with skills and talents and this is a great place for us to find volunteers.

EH: What has the Bayfront Maritime Center done with the proceeds raised from last year's Ales for Sails?

RE: We used a TK Foundation grant [a grant making foundation that supports maritime and youth development programs] to pay for our Project SAIL program, an after school program for teens at any of the area high schools. They gave us a challenge grant and said, "We'll pay for half is you can raise the other half," so that's what we did.

EH: Are any of the breweries bringing any special or new brews?

RE: That's a secret. I can neither confirm, nor deny that they will bring any amazing things. People will have to come and see.

EH: Why is it important for the Erie community to support this event?

RE: Our main efforts here are helping kids in Erie. Some of the kids we work with are the ones who need the most help, and so, when the community comes and helps support this organization, they're directly helping. They're meeting new people and getting to see wat we're doing for these kids.

EH: What has changed this year from last year's event?

RE: We've added two new breweries, so there will be eight this year that will be coming. Last year, people were really interested in seeing the Saint Ayles Skiff that we built. This year, you can see it completed and see the very highly skilled work these kids are doing. The second Saint Ayles Skiff is in the process, and I think people will be amazed at the quality of work these kids exhibit.

EH: What was the biggest takeaway from last year's event?

RE: What we were really surprised and pleased with is that it attracted a younger generation of supporters in the community. We found that this is one way to bring in a whole new demographic of supporters that have a lot to offer.

EH: What do you want to see most from Ales for Sails?

RE: We've worked with 15,000 kids since 1998, we're working on our 92nd boat, we're the only adaptive sailing program in Pennsylvania, and when you say "Bayfront Maritime Center," people don't realize it's us. We want to just get our name out there and show people what we're doing.

Ales for Sails, which is now sold out, will take place on Friday, Feb. 7, from 6 to 9 p.m. The Bayfront Maritime Center is located at 40 Holland St., directly behind the Blasco Library.