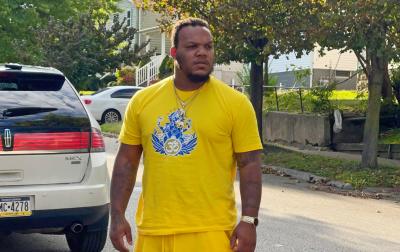 Khyre Drayer, founder of 3RD Official Clothing, has been hitting the streets of Erie with his line of clothing for almost a decade now. After expanding his brand with new logo designs and colors to widen the collection, the Erieite decided to hit the road this past summer to do something that most people with a product would be afraid to do — give it out to strangers for absolutely free.

From Aug. 25 to Sept. 19, Drayer embarked on a lengthy road trip from Pennsylvania to Arizona to bring more awareness to the 3RD Official brand. Stopping in nine different states in between, Drayer's adventurous vision of spreading his clothing line came to fruition. "I just wanted to give out free clothing and have people understand my brand in other places and get some feedback," says Drayer.

And the feedback was nothing short of amazing, as people from all over were photographed rocking the 3RD Official logo — an elephant with the warrior tusks. There was no road map for Drayer's trip, nor was there even a list of locations; instead he decided to keep things spontaneous with an obvious desire for the best. "I mean, I didn't have a clue. I was just stopping and giving in random spots and it worked out for me in the long run," says Drayer. "I got new clients all over and at the end of the day, a lot of people are wearing and know about 3RD Official Clothing."

The leap of faith led the fashion entrepreneur to places such as Missouri, Oklahoma, Colorado Springs, and Phoenix, encountering unfamiliar faces but with similar reactions — all smiles and satisfaction. And though this act of charity may have been done before by other thread ambassadors, it still comes across as a rare occasion. "The response was dope actually," Drayer says. "They never really met a person giving out free clothing so it was all love and (they) treated me great."

Drayer even found himself at the breathtaking Grand Canyon passing out hoodies for no charge, surely a special moment. But when I had asked what the best moment on his escapade was, he had this to say: "The best moments were just riding and stopping in random places that I've never been and going out passing out business cards; mingling in all the great food spots. The experience helped me greatly. I met a lot of good people and got my following going in different states. That's all I wanted out of it."

If you find yourself traveling at all in the latter part of this year, or decide to go on a cross-country car ride, and you stumble upon a few people wearing a 3RD Official hoodie, don't be taken by surprise. The creator himself of the Erie threads was already there.