Racy Netflix series Bridgerton provocative in more ways than one 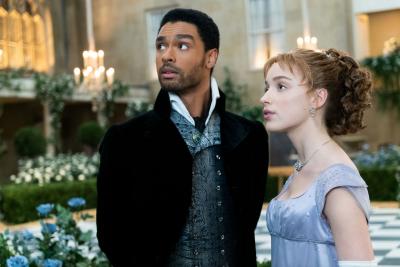 This is the exact same formula for most romance novels, and it is indeed the driving plotline behind Bridgerton, the racy new Regency series on Netflix, produced by showrunner Shonda Rhimes, she of Grey's Anatomy and Scandal fame.

The eight-episode season (one must surely imagine it's the first season) has been adapted from the introductory book in the Bridgerton series of romance novels, entitled The Duke and I, by Julia Quinn.

Daphne Bridgerton, from a prolific and aristocratic yet familiarly modern and loving eight-sibling family, is launched upon London's marriage market. But she soon strikes a deal with newly returned Simon Basset, the reluctant yet dashing Duke of Hastings. They will pretend to court, despite their initial antagonism of each other, while knowing their union to be nothing more than a ruse to buy themselves room to breathe. Of course, they fall for each other, and of course, fate unites them in matrimony.

All of this is watched over and narrated by the new resident gossip girl (Drama dame? Libel lady?), an anonymous pamphleteer who writes under the pen name Lady Whistledown, gloriously voiced by living icon Julie Andrews. Whistledown is not only privy to some startlingly intimate details, she names names.

Much is changed from the book, particularly the inclusion of multiple subplots, most prominently what's going on with the rival family next door, the Featheringtons, and what dissolute rake and eldest Bridgerton son Anthony is up to.

There is also the inclusion of race: this fantasy London is fully integrated, with a Black queen on the throne and an ethnically diverse — and socially equal — population. Some rather obvious dialogue addresses the why and how, but the implication that it wasn't always this way until recently in Bridgerton London, without then addressing the racial complexities of such a society, is problematic.

For example, Male Lead, secretly in love with Female Lead, is Black, which makes a much-discussed sexual assault scene all the more troublesome. The story bends over backward trying to justify the sexual assault of a man by a woman — bad enough (indeed, written worse) in the book.

But the show is then depicting the assault of a Black man by a white woman — and as in the book, without any discussion or real consequence after. This might be enough for some to boycott the series outright, but hopefully, it leads viewers to an open conversation — and Bridgerton creators to do better.

For all of its shortcomings, though, Bridgerton is witty, escapist fun, taking a simple conceit to unexpected depths.