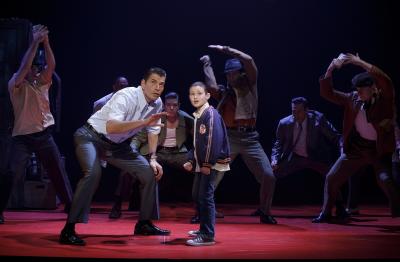 For the last 30 years, the story of Calogero Anello has drawn audiences to stages and screens across the country in A Bronx Tale.

Italian-American boyhood in the Bronx inspired playwright Chazz Palminteri to craft his award-winning autobiographical Broadway play in 1989. The play was picked up by Robert De Niro (who first saw it in Los Angeles) in 1990 and together the two wrote, starred in, and produced the critically acclaimed 1993 film by the same name.

Soon A Bronx Tale — hailed by the New York Times as "the kind of tale that makes you laugh and cry" — will come to Erie as part of the Broadway in Erie series put on by NAC Entertainment.

The show follows the life of Anello, who after witnessing a murder by local mafia boss Sonny LoSpecchio is forced to decide which characters he stands by in his own life — the father he loves (Lorenzo Anello) or the mobster whom he dreams to be one day. As Anello grapples with this dilemma, he is thrown into an adulthood fraught with temptations of money and power.

A Bronx Tale is packed with dance numbers — energetic enough to compete with West Side Story — with music and lyrics by two Broadway powerhouses: Alen Menken (Beauty and the Beast) and Glenn Slater (Love Never Dies).

"You can't help but think, 'Jersey Boys,' as they show starts out," said the Pittsburgh Post-Gazette following the play's showing in the Steel City late last year. "And, with Menken involved, the opening also echoes his 'Little Shop of Horrors,' with a narrated song-and-dance musical journey through the Italian neighborhood of protagonist Calogero's youth."