A Candidate's Future, a Citizen's Now

How what we learn before the primary may matter through 2030 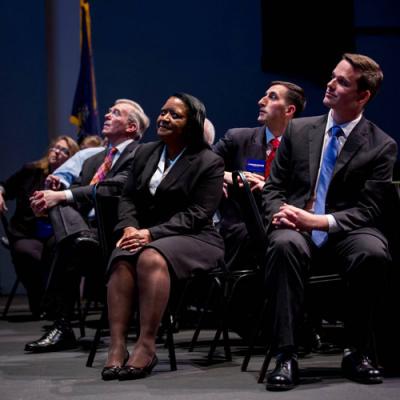 The same thing an independent businessman shares with an associate of MacDonald, Illig, Jones & Britton LLP.

They're all vying to serve Erie as the city's next mayor.

But before voters head to the polls in November to elect their next executive, they'll narrow the field of nine to two on Tuesday, May 16 during the primary election.

The emerging Republican candidate has a 50 percent chance of heading to the general election. The Democrat's chance, on the other hand, slims down to 14 percent.

Seven Democratic candidates are looking to follow in the footsteps of current Erie Mayor and Democrat Joe Sinnott, who was first elected to office after besting Democratic incumbent Rick Filippi in 2005's primary. Mayor Sinnott went on to win both of his re-election bids to stay in City Hall – and ran unopposed during both elections – and is completing the final year of his third term.

Because of Erie's three-term limit, he cannot seek re-election.

On the other side, two Republican candidates are hopeful that they'll do something that hasn't been done since 1961: win the election for Erie's mayor as a Republican. Charles Williamson served as Erie's last Republican mayor in the early sixties, and since then, it's been all Democrats with the city's demographics having shifted to a more than 2-to-1 Democratic voter registration edge, making the path to City Hall a more difficult one for Republicans.

Despite recent national media coverage fixated on how Erie County flipped from blue to red to land Donald Trump at 1600 Pennsylvania Avenue, the city still voted overwhelmingly for Hillary Clinton, the 2016 Democratic presidential candidate who won the popular vote but lost in the Electoral College. That voting disparity marks just the fifth time in the country's history such a thing has happened, the second time this century.

Irrespective of party differences, though, whoever moves into the fifth floor of City Hall has their work cut out for them, both in the near and less-near future.

First, there's the term-limit effect – the near.

Before Joyce Savocchio's tenure as mayor, there wasn't a limit. And Erie didn't seem to mind, re-electing Lou Tullio five times after he first took office in 1966. Since then, two of Erie's three mayors have left office not by the ballot but by the limit.

Savocchio and Sinnott both won all three of their election bids. Filippi did not.

Battling state prosecutor allegations of using his position to broker real estate deals near the then-proposed $80 million lake front gambling enterprise that arose prior to 2005's primary, Filippi served just one term in office from 2002 to 2006. Although Filippi was acquitted of all charges facing him, publicity the case drew factored in when voters pulled the lever.

Many have wondered ever since that had he not been battling a court case, would he have secured a second – and perhaps even a third – term, given the penchant of Erie voters to stick with what they know until forced to choose from a new lot?

Although we'll never know that, we do know that of Erie's most recent mayors – Tullio, Savocchio, Filippi, and Sinnott – the majority have seen long stays at 626 State Street. That leads many to consider the odds that whoever takes office in 2018 could be looking at a comfortable stay until 2030 – if enough muscle is exercised in the lead-up to May and then the follow-through to November. With enough energy spent on getting through the door in 2018, a mayor could then have a decade and then some to advance his or her vision for the region.

But if that's the first consideration, it can be countered by the second: Erie is perceived as a city in crisis – the near-yet-not-so-near.

One needn't look farther than the spike in opioid-related overdoses, the continued cries of crime, the shaky foundation of the city's public schools, the general population decline now teetering around 100,000, and more. That's our near.

But if one does want to look farther, one could turn attention to the CBS News feature "America: Manufacturing Hope" (note: the title is the only thing rosy about the film) or the Yahoo! News write-up "Clinging to hope in a fading factory town." This, too, is our near.

But, both national stories featured "hope" in their headlines. Even in the most doom-and-gloom coverage, there's still hope in Erie, and voters will be looking to the mayor to replenish that wellspring. Which means that if they sense a dearth or don't see that hope springing eternal quickly enough, an extended stay at City Hall may not be a given, considering the fact that voters will want to see significant results in the first 100 days.

But to address public health, crime, education, population decline, and more, an executive will need more than 100 days. Problems that didn't percolate overnight won't be righted overnight. Still, that expectation will be there. Which in a primary election can lead to bold but undefined claims.

Which then leads to the third consideration's three key words: jobs, safety, and money.

On the campaign trail, it's easy for candidates to say they'll bring jobs back. That they'll make the region safer. That they'll balance a budget and not raise taxes.

Oftentimes opting for soundbites over details spells success because details can derail and soundbites are simple. Plus, time is limited. There's only so much earned media. So many hours in the day to knock on doors. A limited number of seconds to purchase commercial air time. And column space for op-eds is measured in inches, not feet.

But now, as spring gives way to yard signs sprouting, Erie is entering its debate-forum phase in the final push before the primary election.

Simply put: Debates and forums matter because they can push candidates beyond the soundbites. They're opportunities to see how candidates stack up against each other, how they respond when mere feet from their opponents – stick to the stump or speak from the heart.

Although a few forums have already taken place, more are on the horizon – starting with one the very day this issue of the Erie Reader hits stands.

The Erie Regional Chamber and Growth Partnership, Erie Arts & Culture, Emerge 2040, Partnership for Erie's Public Schools, Bayfront East Side Taskforce (BEST), Our West Bayfront, League of Women Voters – with additional partners: All Aboard Erie, Preservation Erie, and the Sisters of St. Joseph Neighborhood Network – are hosting "Our City. Our Moment. Our Choice. Erie's Mayoral Forum" from 6 to 8 p.m. on Wednesday, April 12 at the Hirt Auditorium in the Blasco Library.

This forum, which is free and open to the public, will be moderated by WJET's Lou Baxter with panelists Daria Devlin, Marcus Atkinson, and Jim Kurre. The focus will be on the economy, education, and neighborhoods and will include all candidates on the stage at one time. The Young Erie Professionals will host a candidate meet-and-greet immediately following the forum.

On Wednesday, April 26 at 6:30 p.m., a joint-effort forum between Keystone Progress Erie, Mental Health Association of NWPA, and Erie Gay News will focus on poverty, mental health, LGBTQ rights, and other topics, such as health care, election reform, and more. The event will feature candidates from a host of races (Erie mayor included) and will be held at the Hirt Auditorium in the Blasco Library; it is free and open to the public.

Erie Times-News/GoErie.com, along with Erie News Now and Mercyhurst University, will host a debate from 7 to 8:30 p.m. Wednesday, May 3 at the Mary D'Angelo Performing Arts Center. Questions will be posed to candidates from ETN and ENN representatives.

The Jefferson Educational Society is partnering with the Erie Reader and WQLN Public Media to host the Erie's Next Mayor debate on Thursday, May 4. Democratic candidates will debate from 5:30 to 7 p.m. and Republicans will take to the stage from 8 to 9 p.m. The debate will be moderated by C-SPAN Senior Executive Producer Steve Scully, who was tapped as a backup to moderate the presidential debates in 2016.

On May 8, the Manufacturer & Business Association will host a mayoral forum from 8 to 9:30 a.m. focused on business in Erie and held in the MBA Conference Center. The MBA is charging members $10 admission and $20 to nonmembers, which marks the only event scheduled to date that is open to the public but not free to attend.

This list is not exhaustive, and voters should anticipate additional events to be scheduled in the coming weeks. Those will be updated online as our staff becomes aware of them.

But for now, it's safe to say that there are plenty of opportunities to hear from the mayoral candidates. And plenty of conversations that should encourage a deeper dive than one-word promises, like jobs, safety, money, and education.

And although the winner of this race will have plenty of work to do in both the near and not-so-near future, voters have their work cut out for them now by educating themselves on the platforms and promises of the people who are pledging to build on Erie's hope.