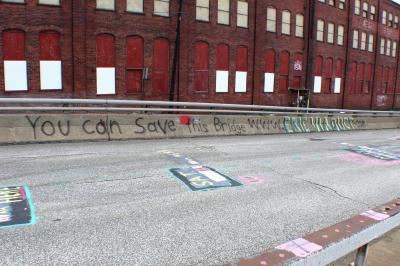 Nick Warren
Former City Councilman and mayoral candidate Jay Breneman encourages dialogue between current leaders and their constituents, and hopes that the McBride Viaduct debate will set a good precedent.

Update 02/07/2018: Erie City Countil voted to move forward with the demolition of the McBride Viaduct in a 4 to 3 vote, also moving to reject a public hearing on the matter.

I was wrong. I admit it. I stayed neutral on an important matter for far too long.

I'm talking about the McBride Viaduct, that bridge that has been etched in everyone's lexicon for the past seven years.

When the viaduct was first closed to vehicular traffic, I like many others imagined it being repurposed for pedestrian-only use. I watched the public debate unfold about saving it for vehicles or tearing it down, only hearing a small rumbling about the pedestrian-only idea.

Fast-forward to my time in public office, when I ended up partnering (and still am) with a then city councilmember on an envisioned rail-to-trail project not far from the viaduct.

I made a choice at the time to stay neutral on the viaduct for a few reasons:

As a county elected official I didn't want to step too much into city business (a line I ended up crossing the more I got fed up with things like every other taxpayer). I worried that City Hall would crush my pedestrian-oriented project if I pushed on a project they seemingly had no interest in; and I also worried about the financial feasibility of keeping the viaduct standing

But my feelings regarding the viaduct changed during the 2017 mayoral primary, when I came to appreciate the level of dedication, passion, and research on the issue by one of my opponents, Lisa Austin.

After the last primary debate, at the Jefferson Educational Society, she beamed with pride as she showed me the materials she put together regarding the viaduct and the surrounding neighborhood.

I am thankful to have gained new insights and appreciation for the ideas and passions held by many of my opponents in that race, and felt there was value in bringing them to fruition no matter who won.

I never really questioned why someone like Lisa — who lives on the west side of town — would want to empower and effect positive change in Erie County's poorest census track, smack dab in the middle of the east side, because as a social worker trained in community development I too had a similar affection for the well-being and future of those neighborhoods.

I, too, heard from many citizens from all parts of town who wished for the viaduct to remain intact — if possible.

During the campaign, my response to voters when asked about the viaduct was that it should be addressed in the same manner that I called for on all place-based issues: through intensive dialogue with the affected neighborhoods, with citizens in the driver seat and empowered by the professionals in City Hall.

This has been my understanding of how best to implement Erie Refocused, the city's idle comprehensive plan. This approach seemed to me to be a natural fit, and this was the advice I offered then candidate Joe Schember and his team in the weeks prior to his winning the general election.

Toward the end of my tenure on County Council, I supported a new revenue stream for bridges and roadways that would raise millions, and could be used to leverage millions more in federal and state funds, knowing it could be used for the viaduct without hurting other projects in the works.

The municipalities were not beating down our door to create this fund. In fact, they had to be dragged into it a bit, but it seemed a wise choice given our city's price tag for implementing Erie Refocused and the growing infrastructure needs in the region, particularly Corry and the inner-ring suburbs.

These, like the funds currently allocated for demolition, could easily be used by City Hall to cost-effectively retain the bridge for pedestrians.

It is a political choice, not one of engineering, and that political choice is made by whoever sits in the mayor's seat on City Hall's fifth floor. No other elected official, bureaucrat or agency official holds that power.

I do not fault Mayor Schember for adopting his predecessor's case for demolition, if in fact that is the best decision for the neighborhood and broader community. But I believe the whole community would be rightfully disappointed if the new mayor did not depart from the old mayor's subpar and downright flagrant opposition to taking the case directly to the community.

Those with leadership experience can attest to the power gained by trusting and empowering those whom you serve to play an active part in the process.

I even wrote a letter to the editor in the Erie Times-News recently on this very perspective, though they probably went a little too far in sensationalizing the headline.

I am not alone in believing the mayor wouldn't lose any power or public confidence for sharing the case for demolition in full and in a public setting, juxtaposed with the case for pedestrian-oriented preservation.
Jay Breneman

If it is the right choice, he will win over detractors and those with questions or confusion will gain greater clarity and understanding. This would certainly prevent his remaining tenure in city hall from being marred by disappointment and questions regarding the validity and veracity of such an important decision.

Mayor Schember and members of Erie City Council: I implore you to lay out all of the facts on all sides of this matter at a public meeting. Put this issue to rest in a way that will build a bridge — figuratively or literally — instead of tearing down the trust, concerns, and passions of our community.

For you, the reader, I urge you to let them know you feel the same.

Jay Breneman can be reached via email@jaybreneman.org