A Chat With Colin Mochrie

Playing 'Whose Interview Is It Anyway?' with the popular Canadian comedian and improviser. 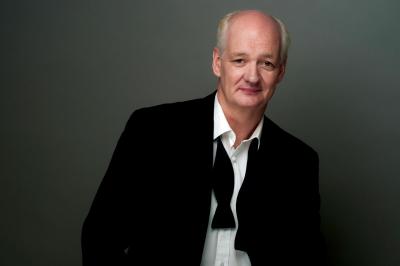 By: Matt Swanseger and Nick Warren

The Erie Reader was excited to learn that two stalwarts of the long-running TV comedy game show Whose Line Is It Anyway?, Colin Mochrie and Brad Sherwood, were making their way to the nearby Chautauqua Institution as part of their "Scared Scriptless" tour on Friday, July 6. Much in the vein of the show that made them instantly recognizable in households across Britain (Channel 4) and the United States (ABC), the performance will hinge almost entirely on audience participation, with audience members taking the stage for improvised routines throughout the evening. Reader editors Matt Swanseger and Nick Warren were equally giddy for the opportunity to speak with Mochrie, and despite some initial confusion as to who would have that honor, both got their wish. The Canadian Mochrie, a master of physical comedy and an ad-lib extraordinaire, reflects on his experiences in improvisational comedy and looks forward to the latest performance of his and Sherwood's highly successful tour (which has been around for the better part of 15 years).

Matt Swanseger: Hello Colin, nice to talk to you. How are you doing?

Colin Mochrie: Good, how are you?

MS: Good, good. What have you been up to lately? Are there any projects or causes you're involved in that our readers should be made aware of?

MS: Nothing wrong with that. Improvisational comedy — is it more nature or nurture? Were you always able to think on your toes or was it a skill that you developed over time?

CM: I'm always able to think on my toes on stage, not so much off. So I don't know what the difference is. I guess because I'm always working with people I know and trust, in an environment that's safe for me, I seem to take to it quite easily. I mean, yeah, I had a couple classes, but it came naturally to me.

MS: To that point, how important is it to have a rapport or chemistry with your fellow improvisers? You had the opportunity to consistently work with a number of very talented comedians on Whose Line Is It Anyway?, one of whom just so happens to be joining you on this tour. What are his strengths and how does what he does well sync with what you do well?

CM: Well, Brad is a very verbal player, he has a great vocabulary and likes to use words, whereas I tend to be more physical and I guess surreal? So we sort of complement one another that way. And it also helps that we've known each other for over 30 years now. When we're working, I probably know about 80 percent or 90 percent of the time where Brad is going to go with a scene, but when I don't, I trust him enough to follow and see what happens.

Nick Warren: Hi Colin! My name is Nick and I'm just kind of popping in to join Matt. I've been a fan for years and years and I am geeking out to be able to talk to you as well. So the "Scared Scriptless" Tour sounds very interesting. Can you go into details about the format of that?

CM: It's actually kind of like a live version of Whose Line?, without the tall guy or black guy [series regulars Ryan Stiles and Wayne Brady]. A lot of the games are familiar to fans of the show, and some games we've had to adapt because it's just the two of us. It's even more interactive than the TV show. Every scene starts with a suggestion from the audience, we have audience members on stage with us for about 80 percent of the games, so the audience is basically our third improv partner. They supply all the information we need.

NW: Is it mostly short form as Whose Line? is, or do any of the scenes weave together in Harold fashion or anything like that?

CM: Basically short form like Whose Line?, the difference is because we're on stage, we have more time to sort of explore the scene. On television everything has to be in these three or four minute segments, but sometimes our scenes go 15 or 20 minutes.

NW: Right, right. It doesn't have to be edited down to sound bites.

MS: No commercials or anything.

NW: Speaking of the short form versus long form schools of thought. Obviously you're on the Mt. Rushmore of short form improv. With the rise of podcasts and Upright Citizens Brigade [theaters and schools] stuff, do you have any opinion on where that's headed and where that's taking comedy and how both those formats can work together to make people laugh more efficiently?

CM: Yeah, I love the fact that people aren't satisfied with improv being just one thing. So the short form I love doing, but I've been doing a lot more long form with different companies around the country. In Edmonton they have something called Improviganza, where improv troupes from all over the world come and do shows and one of the shows I did was an improvised "Dungeons & Dragons." I have never played the game and realized I know nothing about it, but it was a lot of fun to be involved in something where you didn't quite know what you were doing.

NW: Canada's one of the areas that is bursting with new hotbeds for comedy. Are there any special improvisers you'd like to give a shout-out to or have kind of flown under the radar for a bit? I'm just getting familiar with Brad and watching his videos and he's fantastic.

CM: He's okay. [laughter] I'm really lucky that I've got to work with great improvisers, and not only the guys on Whose Line? There's a company in Atlanta called Dad's Garage, and they have an incredible stable of improvisers. There's a group in Portland called Curious Comedy — again, very talented. I think the guys on Whose Line? were all aware of how lucky we were that this show came along and gave us all careers and a chance to do improv around the world. It seems now that in every city there is an incredible core of improvisers, which is great.

NW: Whose Line? is very unique. There really hadn't been a way to televise a Harold routine successfully. It had been attempted a few times, but the massive, long-running success for Whose Line Is It Anyway? is totally special in that it could bring this improvisational comedy to the world. So thank you. What are the differences between doing it on TV and doing it live for you?

CM: The main difference is the time. We can take much more time, and we also don't have to worry about censorship. Not that all our scenes are dirty, but on television there is that concern in the back of your mind because you're never really sure where the line is. So a lot of the time, we're sort of flying blind hoping for the best. It's nice to have that freedom. Also on television you have so many people involved in the final product — network executives, producers, and so forth. What I love about the stage is everything depends on us. If the show sucks, it's because we suck; if it goes well, it's because we did well. So it's nice to have that responsibility.

MS: Are there any specific subjects or topics of discussion you're looking to touch on or avoid in the midst of your act?

CM: Off the top we decided we weren't going to do anything political, because what we found in the last few years is when you do something like that, you end up splitting the audience into two. Political comedy is not really our forte. Our satire comes down to, "Oh that's really stupid." There's no real incisive commentary about it. Satire I believe really has to be written — the idea has to be clear and you have to find the perfect point of view, which is really hard to do when you're improvising.

MS: Well, Colin, I believe that's all we have.

CM: Yeah, it's a really fun show. I mean, you're not going to learn anything or leave any smarter, but you'll have a couple of laughs.

MS: Delightful talking to you. I grew up watching your work on TV and have always been a huge fan, so thanks for taking the time out of your day to talk with us.

NW: Same here. Whenever my friends mention Whose Line Is It Anyway?, [the prevailing sentiment] was "Colin Mochrie was the best" and that's kind of echoed across the Internet and in my own little sphere and taste in comedy.

CM: Well thank you. Obviously you have an intelligent group of friends.

MS: Good luck with your tour and hope to see you soon.