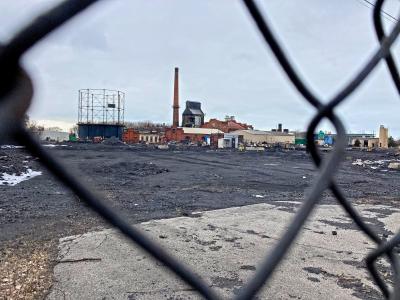 Erie Coke's closure coming on the back of the GAF closure is another blow to Erie's Rust Belt heritage in the minds of many long-time residents. A sentimental trip back into Erie's past reminds us that Erie made fantastically cool stuff from the late 1800s to the 1950s like steam boilers, pumps, and engines. It is easy to get lost in the magnificence of all that machinery we made right here in Erie and believe we used to be great while simultaneously lamenting the so-called decline of the region. Unfortunately, that nostalgic view of Erie as a booming manufacturing town neglects just how dirty the lake was in the late 1970s and early '80s as a result of almost a century of intense heavy industry. In one 1975 EPA report, the lake was described as "brown and fetid." Not only was the lake brown but the air was brown, too. The air was practically unbreathable in the central city and immediate outskirts which was home to many manufacturing sites including Bucyrus-Erie, American Sterilizer, Hammermill, and Erie Coke.

Each time an industrial plant goes out in Erie, residents are always left talking about the same set of problems and solutions. There are cries for the cleanup to be done right mixed among the visions for the future use of the property. In the case of GAF, we learned belatedly that the cleanup performed by Environmental Planning and Design of Pittsburgh may not have been satisfactory. As YourErie.com reported in August 2019, tar that was supposedly sealed underground came bubbling back up to the surface. Casey Wells, the director of the Erie Convention Authority, admitted to YourErie some of the toxic contaminants on-site had been encapsulated instead of removed.

Wells' admission draws new attention to the post-remediation plans purchasers are required to have under Act 2 of the Land Recycling Act, which sets guidelines for compliance for contaminated properties. There is a possibility the carcinogenic coal tar was not encapsulated with public health in mind, given the fact the coal tar came back up to surface five years after the cleanup in a high lake level event. A closer look should be taken at what was done to remediate the property and whether it met the standards for future use. Residents are now left questioning whether the GAF property is safe — will coal tar leak into the bay whenever the water table rises in a storm event? As Erie Coke's site lies dormant awaiting cleanup operations, we need to ask ourselves if we want another DEP-approved cleanup which may not have been executed in a manner to protect public health.

As with any former industrial site, not only are we concerned about the potential for uncontained contamination on the Erie Coke property to cause harm to residents and wildlife, we are also concerned about what happens to that property in the future. It is worth revisiting Erie Reader's 2012 article by Jay Stevens on the Convention Authority's plan for the development of the former GAF property. The article made clear the current hotel and convention center does not even come close to the kind of trendy downtown space envisioned by local architects Kidder and Wachter Architecture and Design. Their plan called for market space with a central attraction which everyone could enjoy. Instead what we have gotten at this point is a hotel, a convention center, and more impervious parking lot surfaces. Stevens believed, based on the Convention Authority's presentation, the most likely future use of the property would include private condominiums which would block the lake forever from the public view.

While the Erie Coke property is situated in an industrial enclave, it is a prime piece of real estate along Lake Erie. It is paramount that Erie does not sleepwalk through the cleanup process this time around. We have the GAF property as a reminder of what happens when not enough residents actively take an interest in the process. According to the Erie Reader, even though over 100 people attended the Convention Authority's meeting, it was not enough and simply too late to have any impact. If the residents of Erie are waiting for a meeting for someone to show us the plans for the Erie Coke property, then we may forfeit our right to have a say in what happens. The lesson learned from GAF's closure is that we as citizens need to take a much higher degree of active interest in the cleanup and development of former industrial properties.

Currently, the EPA is in charge of the cleanup of hazardous and residual waste on the property, which is expected to take up to a year to complete. At no point should we back down from holding all interested parties responsible for the execution of proper cleanup. The changes down on the Bayfront are already tangible. In fact, one of the most visible changes on the Bayfront after Erie Coke ceased operations is the lack of haze over the corner of the Bayfront and East Bay Drive. The air is visibly clearer and does not carry the characteristic odor of tar and rotten eggs. The air monitors the DEP installed along the southern border of the property showed a significant drop in the benzene levels in the 2 months of continuous readings performed after the plant closed in comparison to the benzene levels in the area while the plant was operating. After the plant closed, the air monitors did not capture any benzene concentrations above the EPA action level.

Long-time, long-term birdwatcher and HECA co-leader Dr. Mike Campbell has happily reported several new and exciting bird species in the vicinity of Erie Coke, including red-headed woodpeckers and urban raptors like the Cooper's hawk. The thousands of purple martins congregating at the Lampe Marina against the backdrop of Erie Coke on August evenings without the blight from behind from Erie Coke's exhaust were doubly a joy to behold from the South Pier. Migrating birds are the proverbial canary in the coal mine. When they are absent in an area that would otherwise support them, there is reason to be concerned about the pollution levels in the area. When they return, it is usually considered a sign the quality of the habitat of an area is improving. Building another industrial site on the former Erie Coke property requiring a Title V Air Permit could very well bring back the malodors, haze, and associated potentially toxic residual waste created during the manufacturing process. It could also potentially reverse the improvements made in wildlife diversity and further degrade the quality of habitat for thousands of migrating birds.

The enduring lesson from HECA's courageous stand against Erie Coke is that a homegrown environmental organization can have a tremendous impact on events. HECA's activities influenced Erie City and County Councils to sponsor a resolution against Erie Coke's pollution, forced the DEP to sit up and take notice, and had helped facilitate federally-sponsored air monitoring prior to shut down. We can work together to make this a livable city for all its residents, but it requires hard work and dedication. The dream of a 21st-century high-tech green economy will not come by osmosis or accident. Folks, we have to take a stand against polluters and be more active in lobbying for the kind of city we want, or we will be looking at another GAF in the making.

Anne Helms is the owner of Tri-State Urban Mining and was a member of the environmental activism group Hold Erie County Accountable.