A Day in the Life of an Erie City Firefighter

Running into a blazing building can be 'terrifying,' but some choose to do it, anyway. 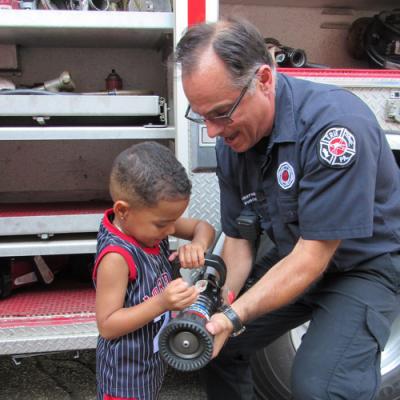 Even in this age of transforming autobots and X-wing Starfighters, kids still become excited at the sight of a fire engine. In fact, most adults do, too. As much of the population swoons over the release of iPhone 7 and tech geeks continue their ascent into "cool guy" territory, there remains an undeniable affinity for the big, red truck.

On a humid, 87-degree, full-sun August Friday afternoon, among swelling crowds at Celebrate Erie, I watch as city firefighters of Engine 8 interact with children and adults alike, next to a retired fire truck parked in front of City Hall. Without shade, and wearing navy blue uniforms, the firefighters get no relief from the heat. But as this job goes, if you can't take the heat – which often reaches 1,200 degrees in a burning building – don't don the uniform.

"I rely on the guy next to me," says Jerry Herrmann, a 12-year veteran, in response to why he runs toward a fire while most people run away. "We're all talking about how hot today is, but when a building is burning, we don't have time to think about that. Each of us has a job to do and that's all we focus on when we arrive at the scene."

Even during Engine 8's two-hour Celebrate Erie shift, there is the feeling of teamwork. As Herrmann answers one girl's question about riding in the truck, Trevor Doust, the youngest and newest member of today's crew, helps a young boy climb.

It's fitting for Doust to be the one lifting the children and helping with their seat belts. All morning, the rest of the crew had joked about the pleasure of having such a young crew member to do the "extra" stuff – a role that Doust embraces.

I met Doust at 7:36 a.m. while he washed a set of second-hand silverware he had purchased a few days earlier from a yard sale (he later explained that all the Engine 8 crews had been washing and reusing the same four large spoons for years). He has brightly-colored, well-demarcated tattoos running up both arms and smiles frequently. By 8:05 a.m., Doust has brewed fresh coffee, taken out the garbage, and started cutting carrots and potatoes for the slow-cooker; it's his turn to make dinner and he brought brisket. Within minutes of my arrival to shadow the Engine 8 crew for a 24-hour shift, the firehouse is operating like any other well-structured house.

As the daily schedule goes, each crew member inspects personal and truck equipment upon arrival, usually between 6:45 and 7:15 a.m. Breakfast is at 7:30, chores at 8, and training at 9 a.m.

If it sounds a bit regimented, it is. It has to be. Every moment, every movement, every article of clothing is planned, prepped, and prioritized to get the crew on the truck and pulling out of the station within one minute. When the call comes in, drop everything and run. Boots, fire pants, suspenders, fire jacket, helmet – forget nothing – in the seat (always the same) belting in, ignition turned, sirens on. One minute.

Greg Purchase, my liaison for the day and the crew's driver, refers to the morning prep as "chaotic organization."

A firefighter's gear weighs 70-90 pounds. And on any given call, a person could be within minutes of critical injury or death. Response time and precision are vital, while carrying nearly 100 extra pounds, and that's all before the bucking force of water hoses capable of throwing water at a level of 100 pounds of pressure.

"Each person has a specific job and is responsible for specific things," Purchase says. "My job as driver is to inspect the truck when I arrive. If something is missing or out of place, that's my responsibility."

Brass polished (including the fire pole the crew still uses) and other cleaning done for the day, Purchase pulls the truck onto the drive in front of Station House 8 at 832 East Avenue to begin the day's training with the new hydraulic Hurst equipment (the tool that cuts through a car frame to save occupants after an accident and is otherwise known as the "Jaws of Life"). The truck idles loudly and, as the crew passes the tool, the first call comes in.

The crew grabs their gear and we're off. The captain's job during calls is to communicate with dispatch and direct the route. Capt. Fred Droney rides in the passenger seat while Purchase drives. It's like this every time.

As we ride, I realize for the first time the actual weight and volume of the job. A firefighter's gear weighs 70-90 pounds. And on any given call, a person could be within minutes of critical injury or death. Response time and precision are vital, while carrying nearly 100 extra pounds, and that's all before the bucking force of water hoses capable of throwing water at a level of 100 pounds of pressure.

And there's noise. A lot of it. Engine, siren, dispatch radio, air conditioning, and beeping. The trucks are high-tech and when any little thing is off, something beeps or an alarm sounds.

Noise does not decrease at the scene. Buildings do not burn in silence. Once a crew enters a building, other than the mics in their helmets for communication, firefighters can neither see nor hear through the smoke or above the thundering fire. Again, the captain leads, and each firefighter on the team has a job. As Herrmann said, they rely on each other to follow their training. Once inside that building, their lives, as well as anyone else's in the building, depend on the crew's ability to adhere to their tasks and their captain's directions.

"Every call, every fire is different," Droney says. "We go through all this training before we come on the job so we understand the basics of fire and emergency rescue. But when we get a call, we develop the plan on the spot and hopefully it's the right plan. There rarely are redos in emergencies."

"Every call, every fire is different," Droney says. "We go through all this training before we come on the job so we understand the basics of fire and emergency rescue. But when we get a call, we develop the plan on the spot and hopefully it's the right plan. There rarely are redos in emergencies."

We arrive to the emergency site in under four minutes, and Droney, Doust, and Herrmann rush in, equipped with emergency medical supplies capable of maintaining life until paramedics arrive. Visual inspection proves the situation to be non-emergent, but nobody in the house speaks English, and communication initially stalls until a family member joins to interpret. From there, things proceed smoothly. EMS arrives quickly and we load back into the truck and head to the foot of Pennsylvania Avenue for pump practice before lunch.

Shooting water through a hose sounds easy enough; but it's actually a $20,000, complicated system of multiple hoses and pressure valves, manipulated and maintained by a designated firefighter at the truck's highly complex, state-of-the-art control panel. Shutting down even one hose too quickly can blow out the pump engine with a sudden release of backpressure. On a 500-gallon truck with 1,300 feet of hose, each of which is capable of pumping 150 gallons of water per minute, this practice is an integral part of the accident preparedness and prevention methods that firefighters follow as a whole. 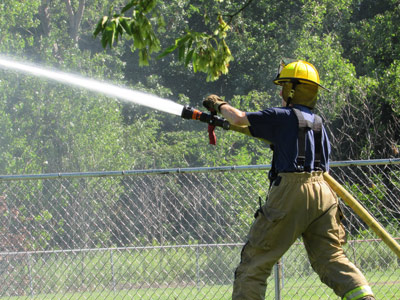 Once the crew cleans, rolls, and replaces the hoses, we return to the station for lunch, and a call comes in for illegal backyard burning. The crew rakes and douses flames until embers lie dormant and we return to the firehouse to prepare for the Celebrate Erie shift.

Even as Purchase backs into the firehouse, each crew member performs a specified job: Droney and Herrmann stand at the garage door and at the back of the firehouse parking area, respectively, to cover Purchase's blind spots, while Doust stops East Avenue traffic.

After Celebrate Erie, the crew welcomes Doust's brisket. Throughout the day, there had been many calls; most of which seemed to go to Engine 12 on Peach Street. Only two so far for Engine 8.

Other than dispatch, the station is quiet and relaxed after dinner. Herrmann eventually retires to the TV room and Doust pulls out his phone to practice Spanish.

"I don't like to run into language barriers like we did today," he says, tapping a lesson on his phone.

The crew sleeps in one large room on the second floor. It's comfortable, with window air conditioners and cable TV. But these days, the city pays for few things. Every bed, TV, chair, and kitchen utensil is donated from the community or paid for out of the station house fund, to which each crew member contributes.

The crew hopes for a quiet night, and they are rewarded. A car fire erupts in a garage after 1 a.m., requiring the services of multiple engines. Before we reach the Bayfront, dispatch calls us off and we return to the station. We hear Engine 12 called out again.

Doust is the first one up and brewing coffee by 6 a.m., and I am grateful. I did not lug equipment or pull on a single item of extra clothing, yet I'm exhausted. Every dispatch call runs through every firehouse. Perhaps they sleep through the calls better than I do.

"We just never know when or what kind of call we will get," Doust says over his steaming black coffee. "When I started training for this, I was terrified at how many ways there are to get injured. All the safety drills we do, all the precautionary procedures we follow – they're all because somebody got hurt or died doing something in the past."

The approach firefighters take toward emergency and disaster preparedness must work, because according to a 2014 article published in Time magazine, firefighting does not even rank in the top 20 most dangerous professions.

As the relief crew arrives, Purchase checks the previous night's logs. Engine 12 went on 24 calls in 24 hours. They must have been awake all night. I can't imagine their exhaustion as they slump into their cars and drive home.

"I love the sound of a firefighter snoring at night," Droney had said the previous day. "It means that all firefighters are accounted for and safe."

For more information on becoming a local firefighter, visit erie.pa.us/fire/Recruitment.aspx.