A Funny Thing Is Happening At The Playhouse

Sondheim comic musical set to be a "Lovely" Erie run 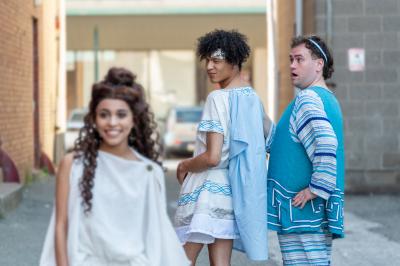 Rick Klein
Zayna Darres (left), Isaiah Aldridge, and Michael Hipwell will hilariously recreate Stephen Sondheim's A Funny Thing Happened to Me on the Way to the Forum at the Erie Playhouse this month (and possibly other famous memes).

When A Funny Thing Happened on the Way to the Forum premiered in 1962 at the Alvin Theater, it marked a very specific milestone: both the music and lyrics were written by Stephen Sondheim, a first for his career.

A Funny Thing… is based on the farces of Plautus, a Roman playwright who lived between 254 and 184 BCE, and Sondheim certainly channels plenty of absurdity and outrageousness.

Said Kate Neubert-Lechner, the executive director of the Erie Playhouse, "We thought with the state of the world now, some great laughs and a few hours of escape would be a welcome respite, and this show and cast certainly deliver!"

This seasoned cast (the entirety of which is made up of Playhouse veterans), will have the audience folded over in no time at all as the madcap romp tells the story of how Pseudolus, a sly, quick-witted, and clever slave in the home of Senex and Dominia (and the personal servant of Hero) attempts to earn his freedom by helping Hero win the love and hand of Philia.

A Funny Thing… was selected, said Neubert-Lechner, to honor the memory of Sondheim, who passed away in November 2021.

"The lyrics are so clever, so witty, with so much alliteration and double meaning, which is what he's all about," she said.

If that's what you're all about — or what you want to be all about — head down to the Playhouse during its limited run, from June 10 to the 26. — Cara Suppa

A Funny Thing Happened on the Way to the Forum