A Justified Crumble at Dramashop 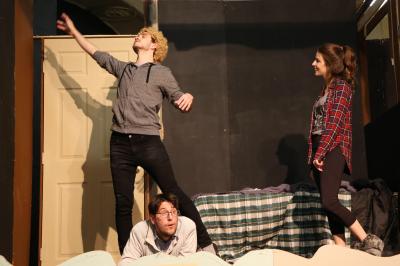 Crumble (Lay Me Down, Justin Timberlake) tells the story of a widowed mother and her daughter as they try to cope with their grief via their celebrity crushes u2014 and the threats of their diabolically sentient apartment.

It has been a year since Janice's dad passed away and the only thing that can bring her out of the abyss she finds herself in is the affection of her celebrity crush, Justin Timberlake.

Dramashop presents Crumble (Lay Me Down, Justin Timberlake), the story of Janice, her anxiety-riddled mother, and the apartment that haunts them, constantly in need of restoration. Their comfort comes from their respective celebrity crushes, Harrison Ford and Justin Timberlake, as they make their way through the Christmas season in grief.

In the show, Janice holds spiteful conversations with her dolls to cope with the sorrows she faces and her mother turns to baking to keep herself busy, but they are faced with larger challenges with their living situation.

Faced with the challenge of how to represent the character of the apartment (played by Zachary Hoffman) and its "murderous" intent, Dramashop's team was able to experiment with it and take their own artistic liberties.

"This may not be the most traditional or easily digestible play, but anyone who enjoys watching characters grapple with complex emotions in a really unique and original way won't be disappointed," said Anna McJunkin, a member of Dramashop's creative team. "It's moving, darkly funny, and gives you plenty to chew on afterwards."

The show weaves in and out of reality with magical realism, setting it apart from other projects they have done. In addition, the lead is played by a face new to Dramashop, Maeve Kirby. Kirby has been a close friend of Dramashop's for a while and has been part of productions at the Erie Playhouse, but Crumble will be her debut at Dramashop.

Interlaced with poetic dialogue, strange fantasy, and surprising humor, McJunkin said the show is a contender for the most bizarre show she has ever been involved with.

"It's emotional and dark at times, but it juxtaposes all of these contrasting moods to make something more true to life than you would expect," McJunkin said. "If audiences are willing to suspend their disbelief, there's little they won't be able to relate to."