A Liege Of One's Own

Setting the barre high at Millcreek's Liege Barre and Pole 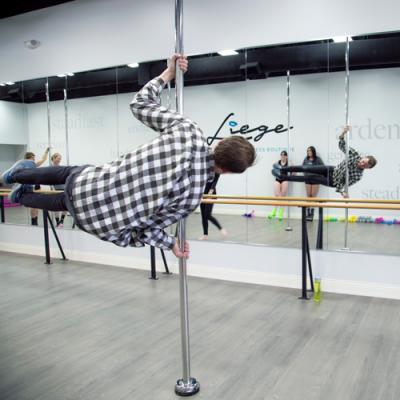 Before its adaptation as standalone fitness routine in 1959 (via Londoner Lotte Berk), barre work had been a mainstay of ballerina/ballerino training regimens for centuries. Traditionally, a barre session begins with slower movements to stretch the muscles and reinforce form. It then graduates to faster, subtler movements to simulate the techniques of a ballet performance in real time. In 1971, Lydia Bach imported the "Lotte Berk Method" to her Manhattan studio. Barre programs have kept Americans Berkulatin' ever since.

"Sit into it!" my instructor commands. I could do this all day.

Jen Esper, sole proprietor of Liege Barre and Pole, is giving me the lowdown on dropping it low. How low can I go? Let's just say the invisible chair I'm sitting into is more of a barstool than a footstool. It is a theoretical office chair with the seat depth set to "peering-over-coworker's-cubicle-tacitly."  In short, it is completely and utterly 100 percent me.

And here, that's all right. "I always tell my students 'be your own frame of reference, not anyone else's,'" Esper explains. "You're on your own journey. Honor your own journey and where you're at in your journey."

Somewhere between my 18th and 22nd barre squat, my thighs begin quivering like a pair of over-agitated tuning forks. This journey is on the verge of falling "A-flat" on its ass, but ultimately succeeds. Victory's afterglow is fleeting, however. The quest resumes shortly thereafter, this time with an exercise ball between my knees.

I am forced to pull over once or twice during my campaign's second phase, which involves squeezing the ball betwixt my knees several times at the bottom of each drop. Stability betrays me more readily here, to the point that I begin to question my legs' loyalty. "Treasonous meatstalks! I am your liege!"

The word "liege" dates back to the feudal age, when a vassal pledged his services to a lord, who in turn swore to protect him. It is derived from the Anglo-French word lige, meaning "free, giving or receiving fidelity" and/or the Old German word leidig, also meaning "free." Ideally, the oath between liege lord and vassals would create a stress-free zone, wherein the servants could focus on happily living and their sovereign could focus on prudently ruling. "Don't worry, I got this," Lord Bullshitscuits assured his subjects. In many cases, he didn't – which would contribute to the feudal system's obsolescence.

Although feudalism failed as a mode of governance, its ideals have endured – the qualities of being faithful, honest, constant, ardent, and true. These adjectives are synonymous with Liege and decorate the studio's eastern wall. To enroll in a class here is to swear fealty to the self, to take ownership of your physical domain. There are 639 muscles and 206 bones in the human body under your conscious control; the mind is their liege lord. It is your responsibility, then, to get acquainted with your constituency.

Esper plays both the role of trusted advisor and court jester along the way, attuning herself to the nuances of each individual while adding a generous dose of levity to the proceedings. In my case, she offered to build a workout playlist exclusively from Wham songs – i.e, "Wake Me Up" on repeat. I get the impression she didn't only because she figured I'd do the jitterbug regardless (which I did, albeit involuntarily).

Feeling it is a given, but feeling it where you're supposed to takes practice. The maneuvers with the exercise ball were meant to "dial into" the smaller adductors of my inner thigh, not the quadriceps. I had the wrong number, but I kept calling them back. No wonder they hung up on me.

There tends to be an even greater disconnect between the reality of Liege's other specialty – pole classes – and its perception. Pole dancing is oft associated with misdirected life's callings, but that (like many things) is just a prerecorded bias of our male-dominated Western society. As I speak to Liege's live operator, a much deeper reality reveals itself – and as I study the pole book afterward, a much broader one. Keying in one-900 during a modern pole class = executing 2½ spins. (Un)dressing for a modern pole class = shedding your [scrubs/fatigues/pantsuit/jumpsuit/spacesuit/bone-dress-of-vanquished-foes] for a tank top and short shorts.  If you're seeking something tackier, either purchase a pair of Mighty Grips (a sort of anklet that helps affix oneself to the pole) or dial 1-900-Mix-A-Lot and kick them nasty thoughts.

The International Pole Dance Fitness Association strives to convert skeptics (sexists) and embrace a more multifaceted paradigm of femininity. Sensuality is an aspect of womanhood, but is not the defining aspect. Likewise, exotic dance is a tradition within the history of pole, but the modern sport covers far more than G-strings and pasties.

The International Pole Dance Fitness Association (IPDFA) was established in 2007 with the aim of kicking them nasty thoughts – to the curb. The organization's primary goal is to legitimize pole as an international sport, thereby clearing it for Olympic competition. Furthermore, the IPDFA strives to convert skeptics (sexists) and embrace a more multifaceted paradigm of femininity. Sensuality is an aspect of womanhood, but is not the defining aspect. Likewise, exotic dance is a tradition within the history of pole, but the modern sport covers far more than G-strings and pasties.

The sensual element traces its roots to the burlesques of France (e.g., Moulin Rouge) and Denmark, but is predominantly a byproduct of the traveling fairs of the 1920s and '30s in which so-called "Hoochi Coochi" dancers performed suggestive maneuvers inside a tent (the pole they utilized was the one supporting the canopy). Meanwhile, the sleazy ringleaders went wee, wee, wee all the way home with the proceeds of said exploitation. If you're wondering why male chauvinist pigs are absent from your box of Barnum's Circus Animals, it's because we men have spent much of history trying to hide our misdeeds.

We are all about touting our merits, though. And let me tell you – we fellas can absolutely rock a pole. I'm not talking about sliding down a pole to descend into the Batcave or climbing a utility pole to rescue a stranded kitten – I'm talking about bona fide performance art. In 12th Century China, fully-costumed men (we're hairy and gross – no one wants to see that) supported themselves from poles between 3 and 9 meters tall, holding their bodies in extreme positions (including the classic "flag") until burn marks appeared on their shoulders. They wore these as a badge of honor amongst their peers, who revered their strength. "Pole Mallakhamb," still practiced in India to this day, involves charging at and flipping directly onto a tapered, wooden pole to hone the speed, reflexes, concentration, and coordination of the scantily clad "pole wrestler." (On second thought, body-length silken robes are rather restrictive – how you gonna nail sick Mallakhambos without promoting optimum tactile feedback?)

Armed with this historical perspective, women like Fawna Dietrich (who instituted the first school of pole dancing in 1994) and Ana Przeplasko (founder of the IPDFA) set to wondering – why are we not entitled to the same rich heritage as men? Why must we wallow in shame while we are equally capable of pride? If poles have fostered agility, strength, and confidence in our hirsute counterparts, can they not do the same for us?

The answer is a resounding yes, if Liege is any indication. The tiny studio, which stands across from Erie International Airport, has taken off since its opening last fall. Over the past six months, Esper's classes have attracted women of all kinds – doctors, nurses, lawyers, professors, and even grandmas (her oldest student is in her 70s).

"Everyone's intrigued," says Esper. "But it's not for everyone."

She is referring to any physical limitations that may otherwise inhibit one from completing the exercises, which emphasize the back and core. "It's not trig, but you need to be mindful of what muscles you're dialing into. It's important to learn the spins and inversions the proper way – then you can add your own little frazzle-snazzle to it."

Social inhibitions, on the other hand, are deemphasized. "This is a safe space for 60 minutes." While it may not be for everyone, anyone "with a pulse" is welcome to try. "It's ecumenical and non-discriminatory."

Newcomers have stepped into Esper's classes tentative and self-conscious and emerged with a remolded self-image. "There is a whole lot of encouragement both inside the studio and out. It is super-duper uplifting [to witness the transformation]."

As long as they're physically up to it, anyone could get down with that.

To begin your journey towards frazzle-snazzle actualization, call 431.9631 or register online at liegebarreandpole.com. Liege is located at 4642 West 12th St, Suite 1 – pump the brakes before you hit the pumps at Country Fair.