A Musician of Several Lifetimes

Graham Nash still speaking, singing out as a septuagenarian 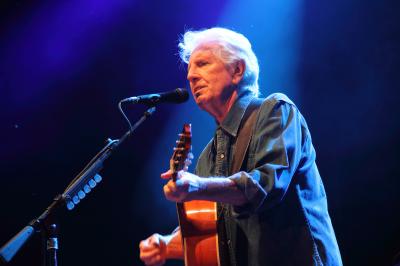 It's hardly an exaggeration to say that in his 77 years on this mortal coil, Graham Nash has lived the equivalent of multiple lifetimes. As a musician, he's made his mark as a founding member of The Hollies, Crosby Stills & Nash and its various permutations, in addition to having a respectable solo career.

The native of Blackpool, Lancashire has also indulged his creative impulses via a lesser-known but equally lauded foray into photography. On top of that, he's a proudly liberal social activist who's written songs railing against everything from nuclear waste dumping ("Barrel of Pain") and what happened at the 1968 Democratic National Convention ("Chicago") to overly-aggressive defense policies ("Military Madness," "Soldiers of Peace") and injustices within the justice system ("Prison Song").

With such an impressive canon of work under his belt, the always-looking forward Nash decided to take a musical look back. Joel Bernstein, the unofficial Crosby Stills Nash & Young archivist who helped pull together the box sets Voyage (David Crosby), Carry On (Stephen Stills), Reflections (Nash), and CSNY 1974," was once again enlisted by Nash for last year's double-CD set, Over the Years… What makes this most recent compilation so unique is that disc 1 features the original songs, while disc 2 centers on demos. As always, Bernstein proved to be an invaluable partner in this project for the Rock and Roll Hall of Famer.

"I recently realized that I hadn't released one of those greatest hits albums over my years of making music," Nash said. "I had a bunch of demos that I recalled having. I've been a kind of archivist throughout it all and stored them safely for about 40 years. I realized that a lot of people have copies of the records of all that stuff. So I thought, why put that out? They've already got that stuff. How can I make it more interesting? I thought if I put my demos of all these songs out there, along with the final record, it would be an interesting thing to observe from how a song started out," Nash explained.

"I found 15 of [those demos], of which 12 are ones that nobody has ever heard before, and I thought that would make an interesting album," he said. "It was very intriguing, because I haven't heard those demos in 30 years because I don't go listening to my stuff. I just knew that I had them somewhere. It was Joel's brilliant detective work that found all of them. Some of them were here and some of them were there, whether it was in my tape box or CSN&Y's tape box or CSN's tape box. Thank God for Joel Bernstein. He's brilliant and he knows more about the four of us than any of us."

Among the gems featured here are the original stripped-down version of "Marrakesh Express" Nash recorded in his London flat in 1968 that was rejected by The Hollies and wound up becoming a CSN cornerstone. Elsewhere, the lush final version of "Just a Song Before I Go" that most people know is juxtaposed by its original arrangement, which features Nash alone on the piano, mapping out the future arrangements. While revisiting these earlier works, Nash himself was surprised by what he found, particularly on "Just a Song."

"While I remembered that somebody bet me $500 that I couldn't write a song before I left [their company], with 'Just a Song Before I Go,' I'd forgotten on that song that I might have even been playing harmonica on it," he said. "It's a lot moodier than the actual record."

As someone who has been adamant about using his creative efforts to speak truth to power, Nash admitted he's disturbed by the chilling effect mega-corporations have had on subtly stifling protest music.

"I think that the people who run today's media you can count on two hands. The thing they do not want on their radio and television or in their magazines and newspapers are protest songs that may rock the boat or disturb the status quo. They learned with Vietnam, don't piss off the people because they can get upset and stop this war in Vietnam. And they did," he pointed out. "The American public rose up, marched in the streets, and called their congressmen and their president, and the American people stopped that war. What they learned from that was don't piss off the people like that. Hence, you never saw anything in Grenada. You never saw anything in Panama. You couldn't even photograph the flag-covered coffins of the soldiers that died. That's how much they're keeping away from you."

At the three-quarter century mark, Nash has no intention of slowing down. With former Bruce Springsteen sideman Shayne Fontayne (who produced Nash's last studio album, 2016's The Path Tonight) as his creative partner for the last handful of years, the irascible Brit is intent on looking forward and playing smaller venues, many of them for the first time. Nash perks up when asked what fans can expect when they come to see him in these more intimate settings.

"The truth is, with these smaller theaters, I can see the audience. I can look in their eyes and know if I'm making a connection. It's important. I don't want to be some performing puppet up there. I want to interact with the audience and let them know how I want to be there and how great this moment is tonight," he said. "I'm tired of seeing people where it's obvious they don't want to be there. I saw The Police on their last big tour, and it was obvious that they didn't even like each other and you can't fool an audience, they'll pick up on that immediately." — Dave Gil de Rubio