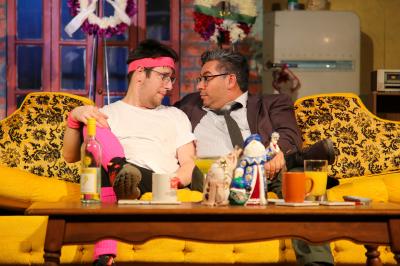 Nichole Lossie
The cast of Crumple Zone get in touch with all of their emotions on stage at Dramashop this month. This is a welcome change in scripting for lead actor Zach Hoffman (left) who is excited to see this range of emotions in a male character.

Queer theater is taking the mainstage at the Dramashop this December. The Crumple Zone is described by Zach Hoffman, who is playing Terry in this five-man show, as "gay, heartfelt, thought provoking, and HILARIOUS."

Hoffman continues, "This is a show about life among people. As the characters laugh and feel together, you also get to see male characters actually feeling all of their feelings, and that's incredible to be a part of because it's not the norm for men to get to show all ranges of their emotions."

Preparations for this role have taught Hoffman a lot about personal growth. He states, "Preparing for the role of Terry has helped me to reflect on myself and where I've come in life as a gay man." As for finally being able to portray that gay man on stage he says, "I have been waiting to portray an openly gay man. I'm so thankful for this opportunity. Terry is a man, who, like myself, is not afraid to feel. This play is so important for the public to be able to see gay men living life, just like anyone else."

According to Concord Theatricals: "This hilarious off-Broadway hit, set in a run-down apartment on Staten Island, concerns three gay roommates coming to a crisis during one frantic Christmas weekend. Terry, an out-of-work actor who can't keep a job or get a date, spends his days swilling cheap vodka and playing referee to a messy love triangle. Extremely funny and deeply moving, The Crumple Zone by Buddy Thomas is about staying together, breaking apart, and the things we lose along the way."

For such a cozy production, this showing of The Crumple Zone is jam-packed with emotions that will make you feel sad, joyous, and make your belly hurt from laughter. Have your tissues ready for this one, because it will tug at your heartstrings.

This production is sponsored by NWPA Pride Alliance, Inc. and Glass Growers Gallery.