Meditation Master Acharya Kedar is on a Mission in Erie. 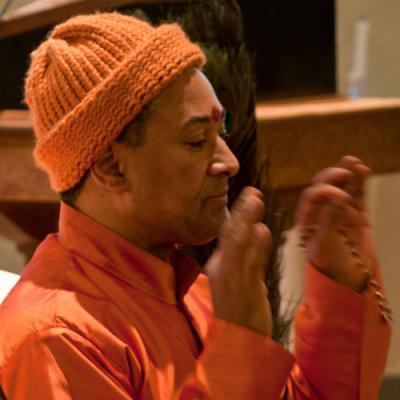 The stress of everyday life is a constant in the modern world. On some days, that stress can feel like a weight pressing down on us; our list of tasks seeming unmanageable while our thoughts tumble around inside our heads like a disjointed movie. Imagine if we could turn that movie off, even for a short time. What is left if we make our minds quiet?

A quiet mind is the goal of meditation. In a quiet mind there is peace, contentment, gratitude and with enough practice, even bliss.

Acharya Kedar is a meditation master and a spiritual teacher, and a few Thursdays  ago, he brought his practice to the Unitarian Universalist congregation of Erie for a night of teaching, chanting, and meditation.

Born in Rome, Italy but raised in New York City, Kedar grew up in a spiritual family of artists and performers. His mother was an opera diva. He studied violin at Julliard and the Manhattan School of Music. He played jazz with the Marsalis brothers. His brother is Giancarlo Esposito, (Gus Fring, for all you Breaking Bad fans).

Kedar dabbled in meditation as a child through Karate and Kung Fu, but it was when he discovered the teachings of the Siddahs, or enlightened masters, that his spiritual journey truly took hold.

"I was initiated into the lineage of Bhagawan Nityananda of Ganeshpuri in 1978, by one of his disciples, Muktananda Paramahamsa," he explains. "The teachings and practices of this Siddha lineage have been passed from Master to Devotee, in an unbroken lineage, since the period just prior to the start of the Bronze Age. So, ours is a time-honored lineage."

With his initiation began 18 years of intense study in the Yoga of the Siddhas. He studied in ashrams in India, New York, Los Angeles, Santa Fe, and Chicago.

"After receiving the command to do so from my Master, I began an independent, not-for-profit, public charity, The Bhakta School of Transformation. Supreme Meditation," he says, "is a program of that school."

And now Kedar's path has led him to Erie, where he sees opportunity abound.

"I have come to Erie to launch a meditation and chanting revolution with the intention to raise consciousness," he adds.

Back at the Unitarian center, Kedar is set up in the center of the room, sitting cross-legged on comfortable pillows, wearing distinctive orange cloth. He begins the evening with spiritual music, chanting the mantra "Om Namah Shivaya," a Sanskrit phrase that translates to "God is in me." Ten-year-old Chloe, an aspiring Yogi who was introduced to the practice by her mother, is set up on the floor in front of him playing along on the harmonium, while the rest of the audience is set up in a semi-circle around the two of them. It is a call and response — audience participation is strongly encouraged but not required. No one is here to judge.

The chanting continues for about five minutes, with the intensity increasing then decreasing – then the music stops. We're enveloped by the silence.

Kedar's voice is the first thing we hear. He instructs us to follow our thoughts as an observer. When a thought enters our mind, we should acknowledge it and let it pass. When another thought arises, we should do the same.