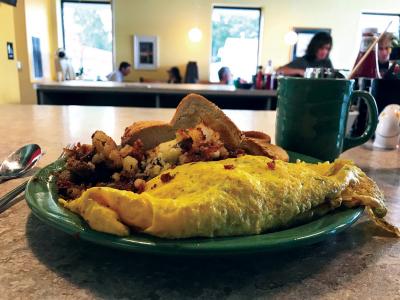 Nick Warren
The Gem City Dinor's bright, roomy dining area fills up quickly, especially on weekends. Despite its youth in the local restaurant scene, it already boasts a devoted batch of regulars thanks to consistent hours and consistently good food.

On the contrary — here it seems that familiarity breeds contentment, as a stream of regulars trickles in during the pre-dawn chill of a Thursday morning. Over in the corner near the window is Mr. Fessler, the patriarch of a large Irish Catholic family (over 40 grandchildren!), reading a newspaper. To the left of the counter, four older gentlemen have assembled for their weekly prayer group. Across the way, a middle-aged man enjoys a moment of peace and a cup of coffee before his shift at work.

"He's not too chatty, but he's here every day," says co-owner Rich Hodges. And that, he explains, is exactly the point. "When you open up a diner, you want to become part of someone's routine." That's why his restaurant is open daily from 5:30 a.m. to 3 p.m., seven days a week. Stop by a few times and before long it's wheedled its way into life's rhythms — especially if they include the occasional polka (Polka Sundays begin with the Polish National Anthem at 9 a.m. sharp).

Hodges and business partner Elaine Reed reimagined the space "from the ground up," converting 3,000-plus square feet formerly occupied by a laundromat and two offices into the Gem City Dinor's bright, inviting dining area. The decor is a blend of maritime (including a beautiful silhouette of Presque Isle fashioned from hammered metal) and classic Americana, set against a warm backdrop of soft, muted yellows — reinforcing a sense of cozy. Meanwhile, exposed ceiling beams and the central breakfast bar reinforce a sense of openness. Wall-mounted televisions play anything from classic Looney Tunes to Joy of Painting reruns to vintage boxing matches, adding a dash of fun and nostalgia.

"The TVs are a bit of a social experiment," Hodges chuckles, recounting a time a young man had so zoned out to Bob Ross daubing happy little clouds onto a canvas that he forgot that he had come to breakfast wearing a Bob Ross t-shirt.

I am on my own happy little cloud as my Giombotta omelet and side order of French toast arrive, initiating the joy of eating. A nimbus of fluffy scrambled egg surrounds a hearty core of sweet Italian sausage, fresh mozzarella, chopped tomato, fried peppers and onions, and potatoes. Surprisingly, the mouthfeel doesn't register too greasy at all. The sweet basil of the crumbled sausage (locally supplied by Bello's Market) and tomato are perfect foils for the surrounding richness, and the mozzarella is delightfully stringy. This requires some dexterity to cooperate with the fork, but it's worth negotiating. A breakwall of breakfast potatoes ("smashbrowns") flanks the feast and is quickly erased in a storm surge of gluttony.

I haven't even gotten to my favorite part yet. If any of you out there are secretly scheming my demise (and I know you are), a trap baited with freshly griddled French toast is a good start. Just the slightest cinnamon-infused crisp on the outside gives way to a warm, tender interior. Gem City's is just the right amount of sweet offset with a little savory, dusted with powdered sugar to let me know they care.

And they genuinely do. "Our customers are like family," affirms Reed. It's not just lip service — Gem City's most loyal customers trust the staff beyond breakfast and lunch. They're there to celebrate special events like birthdays, first communions, college send-offs, and college homecomings and happily eat whatever Hodges dreams up for them. An upcoming toddler's birthday party features a creatively upscaled spin on a kid's menu, highlighted by chicken satay-inspired duck wings with a Concord grape dipping sauce (playing off kid staples chicken tenders and PB&J) and orange-glazed lamb lollipops. "I just have fun with it," he says.

Hodges comes to Erie from Chicago, having served in food sales and "more bar-type establishments." Reed is a veteran of the restaurant industry who got her start in the "very corporate" atmosphere of the former Elby's Big Boy on West 38th Street (where a Walgreens now stands) before making her rounds in the local scene. Their skill sets and personalities are a good fit, with Reed's management experience complementing Hodges' culinary experience. However, neither sees themselves as a one-dimensional "front end" or "back end" employee — they simply see themselves as hosts to their patrons.

"You don't order coffee at a diner," asserts Hodges. This is a diner, damnit (or more accurately a "dinor") — a hot cup of coffee should be poured for you the moment you sit down. Just say the word, yes or no. Gem City's custom blend is specially roasted by Millcreek Coffee right across the street for two reasons: a commitment to locally sourcing when they can (if it's good), and the fact that today's coffee-drinkers are much savvier than they used to be. "Customers expect a little more oomph, even from a diner."

The menu, a collaboration between Hodges and Reed, plays into that mentality as well — not totally straightforward, but not pretentious.

Burnt ham, blackberry jam, and Wisconsin brie add interest and contrast to items like the Gem City Omelet and the Gem City Burger, but at their foundation, they're still comfort food. Don't like the idea of blackberry with your eggs or beef? Order the Ham and Cheese Omelet or the Classic Burger. Or a BLT, described on the menu as "yup." The team plans to switch things up every now and then, so don't be a stranger.

Then again, if you give it a taste, you might be there every day anyway.

Matt Swanseger awakens each morning like a famished grizzly bear, making breakfast his favorite meal of the day. The added fat stores serve him well in his duty to his readers and their emails (mswanseger@eriereader.com).