A Review of A Contract With God (and Other Tenement Stories) 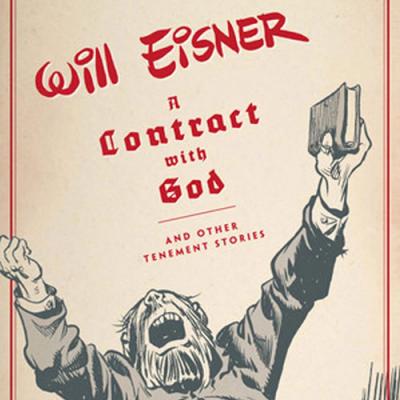 It is impossible to overstate the scale of Will Eisner's influence on the world of comics — or, as he called the visual literature he helped pioneer, "sequential art." Had he abandoned the form after The Spirit's 12-year run ended in 1952, he still would have few peers. Every volume in the graphic-novel section at Barnes & Noble owes a debt to the adventures of this masked crime fighter in fedora and trench coat.

Eisner had some hard times, especially during the McCarthy era, when guardians of public decency stoked hysteria about any comics title more complex than Archie. But he kept working, even through the years-long grief that followed the death of his teenaged daughter. Out of that came "A Contract With God," one of the four "tenement tales" of the Depression originally published in 1978 that make up this volume, each set at 55 Dropsie Avenue, a fictional address in the Bronx.

The other three stories — "The Street Singer," "The Super," and "Cookalein" — are full of pathos, dark humor, and a gnawing hunger for love. Their structure is genuinely tragic: No one gets what he or she "deserves," but the stories dramatize just resolutions of their conflicts.

In the title story, however, we're dropped in the middle of an immigrant version of the Book of Job. Frimme Hersh, a Russian Jew sent to America as his village elders' last hope of cultural survival, has just buried his adopted daughter. Known on Dropsie Avenue as a godly man, he'd discovered infant Rachele in a basket outside his door, and she'd immediately become the joy of his life.

During his journey to America, Hersh had written a contract with God on a flat stone, which he carried until the period of ritual mourning for Rachele had ceased. He spits on the contract, raging at God, the immemorial questions of why innocents die and good deeds go unrewarded, receiving, as always, no answer. Hersh renounces his faith and enters secular life with bitter gusto and quick success, followed by developments as surprising as they are inevitable.

I retell this story partly out of an inability to do justice to the art with which Eisner renders it. Dramatizing Hersh's trudge home through a downpour, the first eight pages alone — each comprised of a single "panel," an element of graphic-novel grammar Eisner manipulates better than anyone else ever has — stagger the imagination. The rain is a living thing that pours off every inch of the man, the streetlights, the tenements, the individual bricks in the wall of 55 Dropsie Avenue. The lettering presses Hersh down, the contract looms over his slogging frame, the interior stairway seems to go nowhere.

Had Will Eisner lived to see his centennial, he'd go every day where he always went — to work, no matter what. All the great ones do.

John Repp grew up near the Palace Depression in Vineland, New Jersey. He has taught writing at Edinboro University since 1991.