A Review of Fluidity of Gender: Sculpture by Linda Stein

Drafting a superhero "born" during World War II to her cause, a New York artist explores male/female roles and expectations. 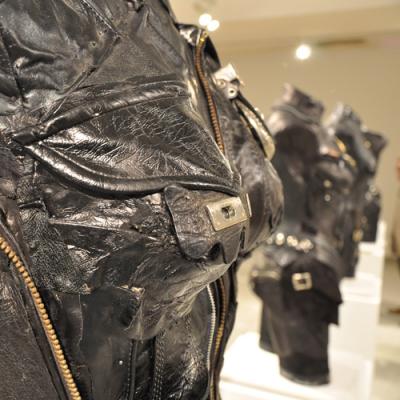 Presently at Allegheny College's Doane Hall of Art, Linda Stein's sculpture in The Fluidity of Gender "explores the continuum between masculinity and femininity, while inspiring the compassion, empathy, and bravery it takes to become an upstander rather than a bystander," according to a press release.

With this series, Stein's ideas become visually evident when it's finally discerned that these daunting, macho torsos are anatomically female.

Out goes the adage "clothes make the man?"

"With my androgynous forms I invite viewers to seek out diversity in unpredictable ways, to 'try on' new personal avatars and self definitions," states Stein in an on-site brochure, "knowing that every new experience changes the brain's structure and inspires each of us toward a more authentic self."

Along the same theme, but on a larger scale, several black leather patchwork creations are mounted to the walls. Portions of shoes with their laces, an alligator purse, and a sliver of a Ben Hogan golf bag compete with belts, buckles, snaps, and lengthy horizontal zippers that seem to challenge the viewer to look away from these high-mounted, ominous, wraith-like shapes and their latent asexual message.

"Justice for All 698" (2010) serves as a transition piece within Fluidity. Identical in size and shape to the other wall-mounted works, "Justice" bursts forth as a bright eye-candy cornucopia that's emblazoned with scenes and individual images of the comic book feminist icon: Wonder Woman.

With a black and white shadow printing of Wonder Woman in all her 1940s glory affixed to the wall next to it, this "body" is concocted of paper, wood, and archival inks. Its "skin" is a collaged surface featuring the feminist prototype as she battles not only crime and supervillains; but also the "glass ceiling" and gender constriction, contemporary topics, and text supplied by the artist.

"Think you can make fun of and scare these men because they're gay, you're wrong!" says the Amazon princess while manhandling a bully.

"Arrow Knight 670" (2009) is composed of wood, metal, leather, paper, and Velcro straps to fasten the front and back midsection, while leaving the left bosom on display. The derriere is exposed save for a row of leather strips.

"Body-Swapping at Flomenhaft Gallery" (2009) is a performance-piece video presented during Fluidity. In it, an audience member wears "Arrow" while communing with a professional dancer who wears a similar Stein creation, albeit sporting a body stocking underneath (for either the sake of modesty or chafing, it's not evident).

According to a gallery official, Heather Brand, three of the pieces can be worn by appointment, and were worn during the reception (which may explain why there is a mirror in the gallery).

Fluidity is part of Have Art Will Travel, a nonprofit founded by Stein in 1972. "With exhibits, lectures, and performances, HAWT addresses issues of racism, sexism, ableism, classism and homophobia," explains an on-site brochure.

Yet beyond the bulky Wonder Woman empowering aegis wear, leather sculptures, and egalitarian manifestos, it seems ironic that while Stein touts fairness for all genders, her totemic creations appear to be for – dare I say? – the fairer sex.