This reimagined landscape has been installed at the Erie Art Museum. 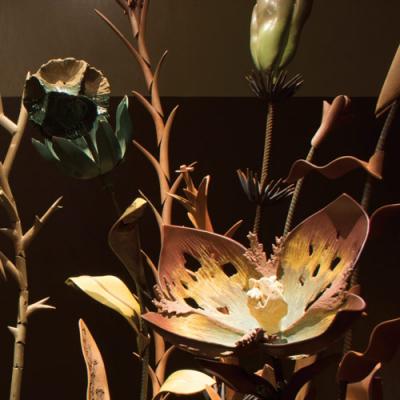 Dark Garden, an installation currently at the Erie Art Museum, attempts to educate patrons about pollution, the benefits of recycling, and saving Mother Earth's precious bounty. It presents imagery of the ills occurring when warnings aren't heeded.

Created by clay artist Linda Huey, Garden is an "installation that addresses environmental issues. It reflects our culture's ambiguous relationship toward nature and questions what we want to see versus what we don't want to see," reads Huey's artist statement.

"My strategy juxtaposes natural with man-made, life with decay, beautiful with ugly, desirable with undesirable, and plays with our acceptance or avoidance of environmental issues," she continues.

Entering Garden, one immediately notices the subdued, even ominous lighting. At the entranceway, so as not to be dismissed, is a large white orb the size of a beach ball. As you approach the gallery's portal, it's evenly framed within the doorway. Once inside, it's an equal distance between the walls of the rectangular room. Bathed in blue light, it hangs as the center of the exhibit.

Huey claims it can be "read as a planet, a moon, or the Earth." Examining the sphere, however, one sees its surface littered with varied detritus (a water bottle, a remote control, a toy car, etc.), that's yet to be discovered on Mars or Io, so one assumes it's Earth. Serving as a satellite view of the world, this spectral globe portrays Earth as a pallid wasteland.

To the sphere's left and right in the rectangular gallery are four planter boxes. Contained within the boxes are disparate 4- to 9-foot tall sprouted sculptures representing the sculptor's "dark garden": nonsensical, ill-formed flora; almost interplanetary plant life which could be set decorations for a sci-fi B-movie. Shrubs and trees within this Garden are malformed: biological emanations that bare ill fruit verboten to touch, let alone to consume; a permutation of nature's bounty – as if raised in Satan's greenhouse. Gaia's revenge!

One plant features a sequence of two tiny skulls, atop one another, totem-pole style, separated by brown tropical palm fronds. It resembles Pre-Columbian art. A tall, brown, barren tree with branches that look like deer antlers, some of which are broken off, reveals a dried, sickly Pepto-Bismol-colored goo inside. A grey-greenish sunflower of sorts has petals shriveled and limp to better expose its diseased seeds. In another, a tiny angel rests in the center of a decaying "flower": a potential Venus flytrap for the tactilely inquisitive.

The gallery's shape doesn't afford the luxury, however, of viewing the garden in all its morbid splendor. The curious will find themselves "box-blocked" by planters that will not allow closer inspection of Huey's dystopian Eden, going tippy-toe in an attempt to view all artworks.

In harvesting Garden, one must separate the wheat from the chaff: beautifully-ugly creations with – dare I say? – a "recycled" theme.

Indeed, Garden may serve as a visual thorn-in-the-eye reminder that Nature = good, Mankind = bad, but since the first Earth Day in 1970, haven't we horrid humans (for once) evolved for the better, at least in terms of separating paper from plastic from glass, etc.?

No worries about me, Mother Nature and Huey: After I'm done with the show's brochure, I promise to recycle it.