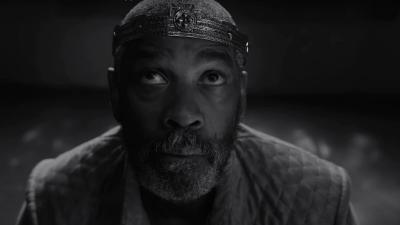 The works of William Shakespeare have endured throughout the centuries not just thanks to his brilliant wordplay, but also the universality of his stories. That is why his play Macbeth has been adapted and retold in so many different cultures and time periods. As long as the allure of ultimate power leads one down a cycle of madness and violence, the story will have relevance. However, Joel Coen's first solo outing (his brother Ethan has since retired from filmmaking) The Tragedy of Macbeth stands apart from other adaptations in its filming style. The film is unlike anything else the director has ever done and in a lot of ways, unlike anything else currently in theaters.

Scottish lord Macbeth (Denzel Washington, excellent as usual), urged on by a prophecy from a trio of witches (all played by Kathryn Hunter) and the persuasions of his wife (Frances McDormand), plots to assassinate King Duncan (Brendan Gleeson) and take the throne himself. The decision and its aftermath lead everyone involved down a path of paranoia, tragedy, and a great many deaths.

Filmed in stark black and white and with minimal, expressionistic sets, the film feels like a lost Carl Theodor Dreyer picture. The minimalism allows us to focus solely on the performances and Washington is more than up to the task. With his gray/white hair and lined, weathered face, his Macbeth is simultaneously fearsome and pathetic. My only complaint is that with a shorter runtime, some of the Bard's wonderful soliloquies feel rushed (the story could have benefited from an extra half hour). That complaint aside, Coen's take on the Macbeth story is an absolute feast for the eyes and ears. The Tragedy of Macbeth is currently playing in select theaters and is available on Apple TV+