A Trail of Shared Heritage 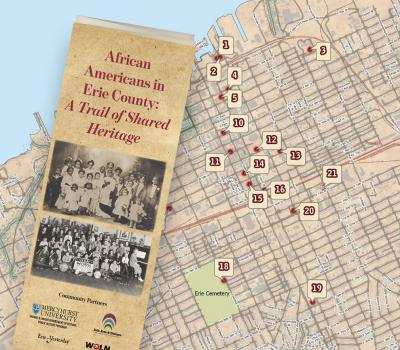 The effort to recognize the Britton Funeral Home and other Black funeral businesses in Erie comes at a time when "African Americans in Erie County: A Trail of Shared Heritage," a community project, is broadening its reach.

In December, the Pennsylvania Humanities Council awarded a $16,000 grant to the project to install markers at 10 of 29 historic sites listed on the trail's website, sharedheritage.org. The sites are documented in the project's four-fold brochure.

Chris Magoc, Ph.D., history professor at Mercyhurst University, has been involved from the beginning with "African Americans in Erie County: A Trail of Shared Heritage," a collaborative effort of Mercyhurst, Erie Arts & Culture, Erie-Yesterday and WQLN.

He explained the project's origin in this question-and-answer, lightly edited for clarity.

Liz Allen: How did you originally get interested in the Shared Heritage project?

Chris Magoc: It began in the 2011-12 school year. The Edinboro Area Historical Society received a grant from the Pennsylvania Historical and Museum Commission to put together an exhibit on the civil rights legacy of Leroy and Beatrice Smith.

The other piece of the grant was to develop a draft of a countywide trail of African-American history. Our public history student, Adriana Houseman, did a wonderful job doing just that — working with retired Erie teacher Johnny Johnson and drawing on Journey from Jerusalem, An Illustrated Introduction to Erie's African American History, 1795-1995, by Sarah S. Thompson with Karen James, to develop the brochure that was Adriana's senior project.

There it sat for five years, until the Erie Times-News needed a Black History Month story in February 2017. Our PR officer, Debbie Morton, reached out to me. Well, I've got this tour, I said. Next thing we know, we have the front-page story and I had a chance to meet Johnny, through Melinda Meyer. (Melinda is president of Preservation Erie and chair of the city of Erie's Historic Review Commission.)

From that point, we — Johnny, Melinda, Sarah Thompson initially, and me — started meeting to lay out the project. A $3,000 grant from Erie Arts & Culture in fall 2017 got us moving.

It took nearly three full years to get the project completed, including working with Johnny at WQLN to record the five oral histories in 2018, some of the most remarkable oral histories I have ever had the honor to be part of.

Then I was able to engage another of our students to help develop the website. Content came from Johnny's Lawrence family archives, from Journey from Jerusalem, and from Erie County Library Assistant Debbi Lyon's wonderful collection at the Heritage Room at Blasco Library, truly a collaborative effort.

LA: What keeps you engaged?

CM: The history itself is so richly fascinating and magnetic for anyone with an interest in American history — stories of courage and heroism and expanding American freedom, stories of entrepreneurial innovation, of interracial progress. My wife Mary Ellen grew up on the land once owned by a former enslaved person, Boe Bladen. That just blew my little mind. We never know what history is under our very feet. Ada and Earl Lawrence and the Pope Hotel and Pontiacs perhaps and on to Celestine Davis fighting to celebrate the King holiday in the Erie School District years before it was a federal holiday.

The Gospel Hill Cemetery is so moving. So many of the sites and stories are just endlessly interesting, enriching of — and inextricably entwined with — the overall history of the Erie region.

And then there is this: This project has unfolded over a decade of increased racial division, hate crimes, the licensing by an American president of white grievance and open expressions of racial resentment, the ugly resurgence of white supremacy, and an assault on voting rights the likes of which we have not seen since the end of Reconstruction.

The value of this project has been heightened immensely over the past few years. It was perhaps fortuitous that the completion of the brochure/website was delayed until the summer of 2020 in the wake of the murder of George Floyd and the attempt at a national reckoning with historic systemic racism in America.

It is our prayerful hope that the history that so many — Ada Lawrence, Celestine Davis, Johnny Johnson, Karen James and Sarah Thompson, Melinda Meyer, Debbi Lyon — have worked to research and document, and that we now have written up in brochure and website form, will help inform ongoing conversations about to how address contemporary issues of poverty, education, criminal justice, and other insidious issues of structural racism that persist in the city and throughout the region.

LA: Any advice for people who want to share their own stories, either with the public or within their families?

CM: Record your family members' oral histories. Today. Before it is too late. We are hopeful that other oral histories can be recorded and added to the Shared Heritage site over time.

The Heritage Room at Blasco Library now offers access to 19 volumes of "Erie, Pa., African American Resources," including newspaper clippings and other documents dating to 1792. Library Assistant Debbi Lyon has been assembling the project, with encouragement and advice from retired Erie teacher Johnny Johnson.

Lyon said her own interest in documenting Black history in Erie was sparked when she began working on the first of two books she has written about the history of Wesleyville. "Be sure to include the Black people who lived there," Karen James, who worked on Journey from Jerusalem, An Illustrated Introduction to Erie's African-American History, 1795-1995, told Lyon.

Journey from Jerusalem and Lyon's books, Greetings from Wesleyville, volumes I and II, are available for research in the Heritage Room and also for checkout at the library.