A Walk in the Park

by Mary Birdsong
View ProfileTwitterRSS Feed
November 7, 2018 at 9:15 AM 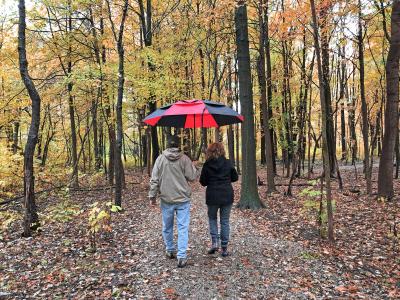 "This is where my father was born," says Mark Curtis. He, his wife Robin, and I are standing on one of the newer trails at McClelland Park, looking over a large depression in the ground. In it are the some of the concrete blocks that once served as the foundation of what Curtis calls "the cottage."

Curtis's ancestors owned this parcel of land since the Civil War. And even though his grandparents owned the larger white house on the property (still standing on McClelland Avenue), they moved into the cottage in the woods to rent out the bigger house for income during the Depression. We are in the northwest corner of the 58-acre park and unless one looks carefully or knows a little history, it would be difficult to tell that a home once stood there.

There are a lot of places in McClelland Park just like that cottage site, looking very different than in times past. Although owned by the city of Erie since the 1970s —when Curtis's grandmother, Helen Beck Cooper Curtis, sold it to the municipality — it was not always this picturesque or inviting. Until the early 2000s, the property stood unused and unloved. One part had been a commercial gravel pit and the property was mostly a dumping ground for leftover concrete and asphalt from municipal street work.

Now, the gravel pit area is a large grassy hollow just west of the two-and-a-half acre Larry R. Fabrizi Dog Park and ready for a pick-up football game or some Frisbee tossing. And McDannell's Run, which flows on the eastern side of the park, sees less trash and erosion.

One of the earliest improvements at the property was the creation of the dog park in 2015, which came about as a result of a master plan created in 2013 at the request of a partnership formed between representatives of the city, the Burton-Diehl Neighborhood Association (then called Friends of McClelland Park), the Lake Erie Region Conservancy, Mercyhurst University, and neighborhood schools.

Since then, numerous groups have collaborated to further execute the master plan. Most recently, in 2016, the Lake Erie Group of the Sierra Club garnered a $10,000 "Trails Connecting People with Nature" grant from the Sierra Club Foundation. This was utilized for establishing or improving trails, widening them, and securing the ground with crushed gravel to make them ADA accessible. 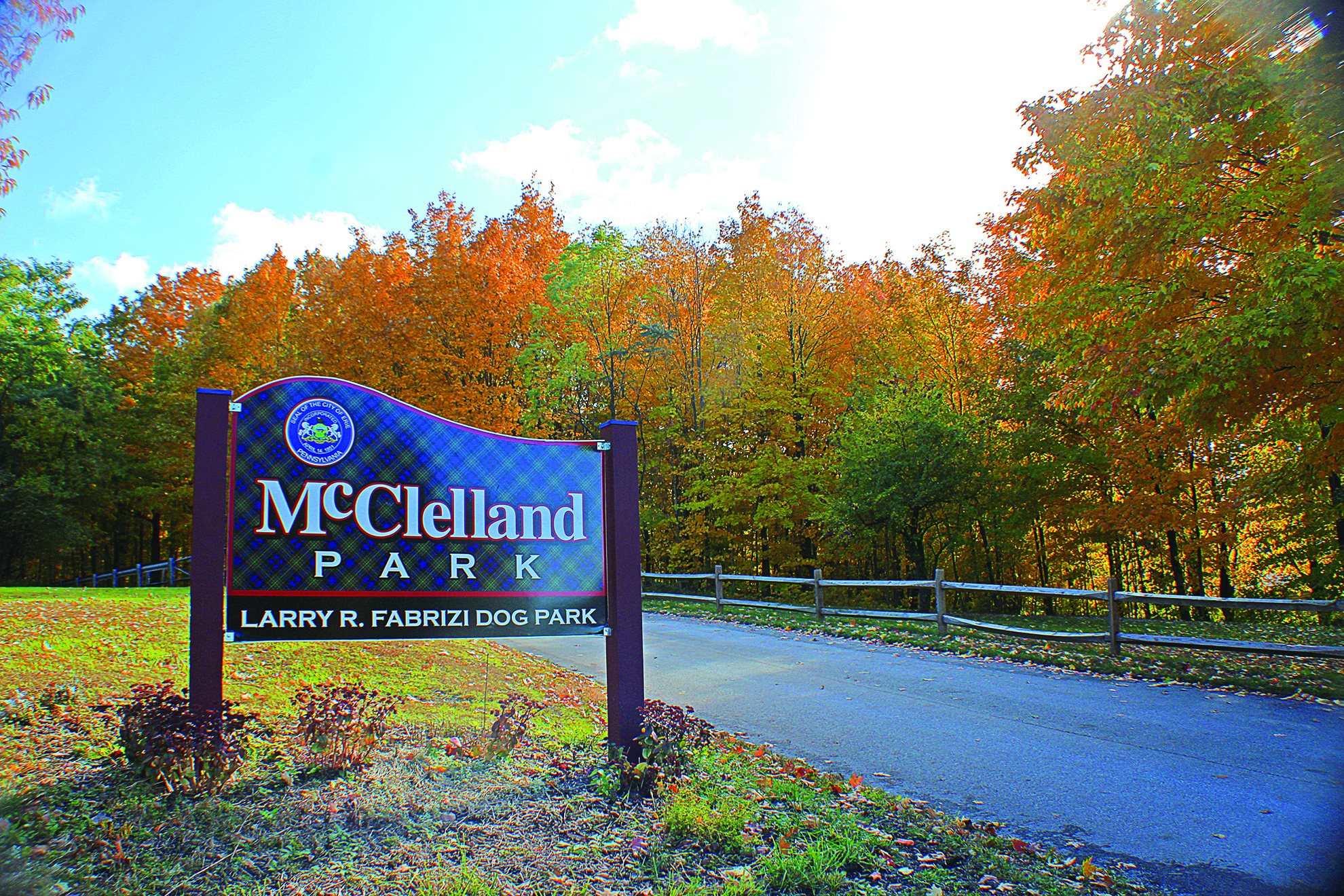 The revitalized McClelland Park offers 58 acres of recreational space on Erie's east side, perfect for hiking, birdwatching, cross country skiing, snowshoeing, or tossing a football around. Bailey, a border collie, takes a break from a rigorous Frisbee session with owner Ann Hatheway at the 2.5-acre Larry R. Fabrizi Dog Park, which was formerly a gravel pit.

Again, the Burton-Diehl Neighborhood Association, the city and a plenitude of other organizations rolled up their collective sleeves. Erie City provided work crews and other in-kind services. Presque Isle Audubon funded the creation of nature education signage that gives visitors a glimpse into the flora and fauna they may find there, and Custom Engineering — a neighbor located on McClelland Avenue — and Erie County both provided help. A sign near the parking area announces an additional 11 partners that joined in the effort.

Tom Furhman, executive director for the Lake Erie Regional Conservancy, an organization that has been a part of the park development for more than a decade explains, "Sister Rita of the Sisters of Mercy has been the driving force behind this work and deserves much of the credit. She and the sisters brought neighbors together to form the association and she has worked tirelessly towards improving the park."

Tom Hiegel from Lake Erie Group of the Sierra Club, says the improvements "already have encouraged people to come to the park's trail system. It gets dozens of users daily during the week and many more on weekends."

This green space now has much to offer besides socializing at the dog park. According to Hiegel, visitors can explore the wetlands, bird watch, hike, ski or snowshoe, as well as picnic, search for geocaches, or just rest on the new benches situated with good views. Hiegel added that the project "was way more successful than we ever thought it would be. The vandalism has been nearly zero since both the dog area and trail system were built."

A newly established Monarch Waystation, with plantings to specifically attract those butterflies adds to the diverse offerings for both humans and wildlife.

And while parks are typically thought of as places for people to find shade and sanctuary, wildlife benefits as well from the cover, food, and appropriate habitat they may not find elsewhere in an urban environment.

"The east side has always been underserved as far as parks and recreation go. The west side has Frontier, which is only 33 acres. McClelland is much bigger," says Fuhrman. "Now it has this beautiful space in which to play, learn and recreate."

Mark and Robin Curtis, who live nearby, agree. They are pleased to see their former family's property come to life after so many years of neglect. "When we went to our grandparents' house, we always played here. As I got older, I always walked and picked up trash."

With the park's transformation in progress, they come here often with their dog and to walk the trails. And they no longer have to pick up trash.