Curious about the green fairy? Scott Peterson fills us in on absinthe, legal in the U.S. since 2007. 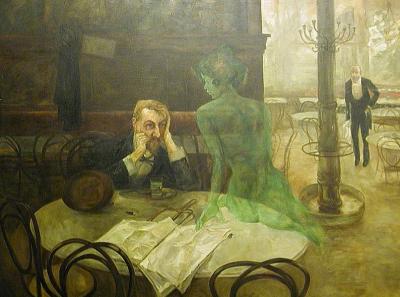 In 2007 absinthe, the shadowy drink of poets and artists from the Bell Époque, had its 95-year ban lifted here in the United States. What is this drink that is so wrapped in mystery? Why was it gone from the world stage for most of the 20th century? Is it worthy of its dubious reputation, and, most importantly, is it worth trying now?

Simply put, absinthe is a potent, high-proof spirit. All absinthes must contain a "holy trinity" of herbal ingredients – anise, fennel, and grand wormwood (Artemisia absinthium). The addition of various other herbs produces the variety of tastes that traditionally separates one brand from another. It's also the addition of these herbs, more precisely their chlorophyll, that can give the drink its distinct green hue. The anise gives absinthe a black licorice taste that is very noticeable in simple brands, but much more subtle in the complex ones.

Absinthe was born in the Val-de-Travers region of Switzerland in the late 1700s. It was thought of as more of a medicinal tonic during its early years than as a casual cocktail. The French army put the licorice flavored drink inside the canteens of its soldiers to purify their water against malaria during the conquest of Algeria in the 1840s. When those victorious soldiers came back to Paris, they found that they had acquired a taste for the drink and began ordering it in cafés. Soon it became extremely popular with all Frenchmen, and 5 p.m. became "l'heure verte" (The Green Hour). By the late 1800s absinthe had eclipsed wine as the beverage of choice in France. The drink caught the fancy of artists like Edgar Degas and Henri de Toulouse Lautrec and poets like Oscar Wilde. They and many others claimed absinthe, or "the green fairy" as it became known, was an inspiration for their art.

But it all came crashing down. At the turn of the century a growing temperance movement and a jealous wine industry were working to pull absinthe off of its throne. They began to point to cases of people (mostly alcoholics) having hallucinations and going mad on the drink. This was almost certainly due to a few unscrupulous distillers selling rotgut concoctions and using poisonous copper sulfate to give the phony absinthe a cheap, artificial green color. Then in 1905, a lunatic Swiss farmer name Jean Lanfrey murdered his family after consuming two glasses of absinthe in the morning. Critics seized on that as proof the drink made you not only decadent and potentially mad, but dangerous as well. The fact that Lanfrey was an alcoholic who also had many glasses of wine that day was conveniently ignored. The verdict was already decided. Absinthe was guilty and soon it was banned in Switzerland (1908), the United States (1912), and finally France (1914). Though absinthe remained legal in a handful of countries, it never regained its popularity. In Switzerland, its production simply went underground where it was made clear and disguised as legal liquor. But nothing could save the drink, and it eventually faded into myth in most of the world.

Fortunately reasonable minds took a fresh look at absinthe towards the end of the 20th century. This was spurred by a 1990s renaissance of the drink in areas like the Czech Republic, where it had never been banned but was also never historically popular either. Studies found that absinthe is no more or less dangerous for you than any other spirit. It won't make you hallucinate and will not, on its own, make you want to carve up your family. In 2000, the French absinthe ban was lifted and a few years later most of the world followed suit. The green fairy was finally let out of her cage.

Given all of that, you may be wondering what makes absinthe so special. The drink is prepared in a really cool ritual. Because of its potency, one ounce of absinthe should have ice cold water poured into it in a 3:1 to 5:1 ratio for ideal consumption. The water should be added slowly, which releases the bouquet and flavors properly and turns the drink opalescent, called the "louche" effect. Many prefer to add sugar to their absinthe, which is done by putting a sugar cube on a specially slotted spoon resting on top of the glass. The iced water is poured slowly over the sugar until it melts through the spoon into the drink. Online, one can find special water drippers, spoons, and glasses to give the ritual an elegant and classy look. But in reality you don't need all of that. You can still accomplish the proper preparation by using a wine glass, decanter of ice cold water, and, should you choose to sweeten the drink, a simple fork.

Absinthe can also affect you a little differently than other alcohols do, provided of course that you don't overindulge. Ten glasses of the stuff will make you just as sick as 10 glasses of any vodka, rum, or gin. But if you find that "sweet spot," usually about three drinks in my experience, you may find yourself having a very relaxed feeling with the bonus of having many of your senses left intact. Some have called it a "clear drunkenness." Maybe this is what the artists of the Bell Époque were talking about. Will the drink make you hallucinate? No. Will it give you artistic ability where you had none to begin with? I'm afraid not. Will it help bring out or enhance something that is already there? Perhaps it might.

It should be stated that though you may not feel like you are over the legal limit after having a few absinthes, you probably are. Make sure if you are imbibing this or any other drink that you always have a designated driver. A few other caveats, too. Never drink a straight shot of the stuff. That's akin to using a fine wine as a meat marinade. Don't be a clueless douche! Show the drink some respect and prepare it in the proper way. You may have also seen some movies in which the sugar is lit on fire and then doused with the water. Don't do this either. It ruins the flavor of the absinthe, and because you are dealing with high proof alcohol, will eventually set something on fire that you don't want set on fire. There is no romantic, historical authenticity to the Bohemian "fire ritual." It was invented in the Czech revival of the 1990s. Van Gogh most assuredly never burned his absinthe and neither should you.

Now that you know the colorful history of the drink and what it actually is you may be wondering where you can get some. Pennsylvania liquor stores sell three brands. Grande Absente is technically a liqueur (the sugar is already added in the bottle), which means it is not truly an absinthe in many people's minds. I would not recommend this brand because of the added sugar. It has a rather simple taste and is just as expensive as better brands, too. If you are looking for a good starter brand, Lucid is an acceptable choice. It is sold in a unique black bottle featuring a pair of glowing green cat eyes. The last time I checked it also came with an absinthe sugar spoon as a bonus. While the taste is not as complex as higher-end brands, this is a decent offering that can be found nationwide. The last brand available in our liquor stores is Vieux Carré, which is distilled in Philadelphia. It's the best of the three and has received nationwide kudos for its quality. Many other herbs in addition to the "holy trinity" can be found in Vieux Carré, and subtle flavors reveal themselves during the first few tastings. This should be a staple of any absintheur's liquor cabinet.

Unfortunately most of the local bars around here do not offer absinthe yet. One notable exception is the crooked i, which offers Vieux Carré and Grande Absente. Obviously I recommend Vieux Carré. What is even better is that they prepare the drink properly, too. It is a tad expensive, though. A glass there will set you back $12. You should always tip a few extra bucks because of the extra time the bartenders must put in to making the drink, too. But if you're flush with cash and the mood is right, there's nothing better than sipping an absinthe while listening to some of the great bands that find their way there.

If you like absinthe and are looking to expand your own collection, I highly recommend looking up the wormwoodsociety.org for brand and buying recommendations. Be warned, there is a lot of "crapsinthe" out there posing as the genuine article yet still charging the same top-shelf price. The forums at the wormwoodsociety.org are invaluable for sifting through the ever growing market to discern the genuine from the imitators and the good online vendors from the bad.

Scott Peterson is a CPA and an amateur absinthe enthusiast. He lives in Erie with his lovely wife Lisa, their two children and a bevy of family and friends. He also hopes that Stannis Baratheon can find a way to win the Iron Throne of Westeros.