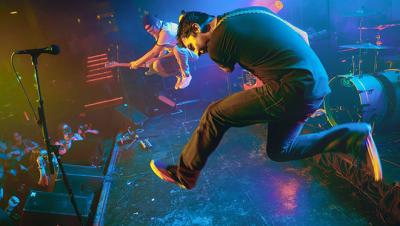 It's an unfortunate truth that most of us know someone who has been a victim of sexual assault. This past year has seen the issue come disturbingly into focus in the public eye, with victims coming forward with allegations of sexual misconduct against many beloved musicians, actors, and other entertainers, leaving many people feeling uncertain whether they can feel safe in places that once brought them solace.

Enter Amity Fest II, an all-day music festival hosted by Amity Threads, featuring 18 local, regional, and national bands, with all proceeds going to A Voice for the Innocent (AVFTI) — a non-profit organization dedicated to supporting and empowering victims of sexual abuse. By partnering with AVFTI, Amity Fest hopes to help raise awareness for the cause and create a safer community in the music scene.

"I found out about AVFTI through volunteering with nonprofits for the Warped Tour throughout the years," says Amity Threads founder Braden Docherty. "I had eventually started following them on social media and strongly support their cause. Supporting those affected by sexual assault is such a huge piece of allowing survivors to grow and rebuild. AVFTI does such a wonderful job empowering those who reach out to them — it's truly inspiring. Through that, with all that had happened with Harvey Weinstein and the music scene, it only seemed right to support AVFTI and those they help."

Headlining the fest is the Harrisburg-based pop-punk band Handguns. After a four-year stint of playing and writing music without any founding members, Handguns is making their first appearance at the new Basement Transmissions with their classic lineup from their first two EPs, reuniting with guitarist Jake Langley, bassist Nate Bobb, and drummer Marco Florey (coincidentally, Langley and Bobb's final show before leaving the band in October 2012 was at the old Basement Transmissions on State Street.)

"It's important as a human being to be cognizant of other people's safety and security regardless of the current state of the world at this time," Langley said about the cause. "I have always believed in the furtherance of these kinds of causes."

On returning to Erie, Langley commented, "I'm always excited to play anywhere, especially a place with personal history. Though the building itself isn't the same, I'm stoked."

The first 200 patrons through the door will receive a free re-release of Handguns' debut EP, Anywhere But Home.

In addition to the bands, a number of local businesses are rallying behind the cause. Voodoo Brewery, Game Over Tattoo, Bay City Tattoo, the Erie Art Museum, the Erie Otters, and World of Music are all donating raffle items, and Ben Red of Game Over Tattoo is doing special tattoos for the fest to help raise money for AVFTI.

Cleveland band Light Years will be sharing the bill, as well as The Weekend Classic, Eternal Boy, Belmont, Sink the Ship, and Riviera.

Amity Fest, true to its definition, is all about bringing the community together, striving towards a common good, and fighting for what we know is right. — Tommy Shannon