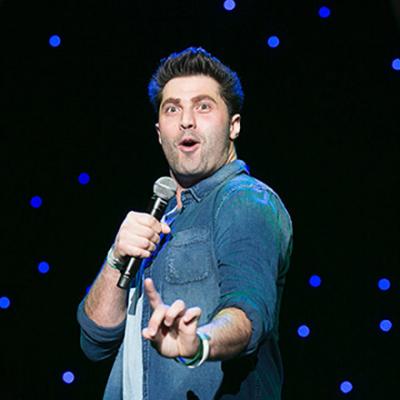 Most comedians frequent the universal-themes park for their material, but few were ever on a Universal Theme Parks payroll. Therein lies the difference for comedian Adam Ray.

After graduating from USC, Ray spent six years at Universal Theme Parks Hollywood as a tour guide and Marvel Comics character, Wolverine. Those experiences afforded Ray a unique vantage point for surveying humankind, as well as ample opportunity to interact with crowds and improvise. As such, Ray has a natural onstage presence and is playfully interactive with his audiences. While not quite as gruff or sardonic as the X-Man he portrayed in his former day job, he nevertheless speaks with an off-the-cuff frankness about all the topics pertinent to a man in his early 30s: relationships & dating, health & fitness, drugs & alcohol, etc.

In addition to his standup, Ray co-hosts the TBS comedy game show Separation Anxiety and the podcast About Last Night. He also has appeared in movies The Heat (2013), Spy (2015), and the recent Ghostbusters reboot (2016) as the voice of Slimer. He has parlayed his sketchwriting experience (over 30 million views on YouTube and Funny or Die) into a regular cast membership on the revived MADtv on the CW, often lampooning the overbearing "bro" types that are a staple of his native West Coast.

Erieites will have five Hollywood good looks at his act before he's gone, so see him while you can. Disappointment, too, is a universal theme. – Matt Swanseger