Head to the Rook for some accessible, danceable entertainment from After Funk. 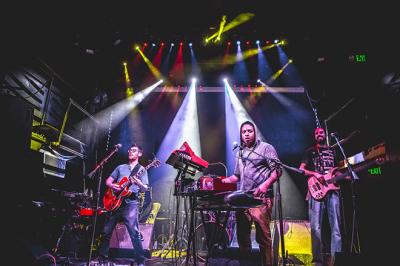 Ready and certainly psyched for their first downstairs show, After Funk are heading back to the frozen tundra of Erie, Pa. But this isn't just a sit-back-and-let-the-music-wash-over-you kind of a gig. Not at all. Jaime Rosenberg, After Funk's drummer, explains the band brings a "high energy, dynamic performance" that is sure to be contagious. So if you are looking for a way to dance away those winter blues, don't wait until After Funk is gone: Not only will the group play their share of original tunes, but they also like to mix things up, creating medleys with their own sound and weaving in more familiar covers as well. To get a sense of After Funk's vibe, Rosenberg suggests listeners check out "Elephant Walk," "Catching Sunrise," and "The Fugitives."

These Toronto natives are not just about playing some great tunes; they also love the collective consciousness and camaraderie that comes with being part of a band. Rosenberg explains that his "favorite thing about being in a band is being able to travel around with my best friends and play music to receptive audiences." He added that "we work really hard at this so its great to see it grow. I also love making new friends all over the place." Together with his bandmates, Rosenberg feels that he is really creating "something unique" and he loves watching the fan base and feeding off the audience's excitement and interest in the After Funk sound. So go ahead, be part of something neat and head to the Rook for some accessible, danceable entertainment — and maybe make a new friend or two. — Miriam Lamey