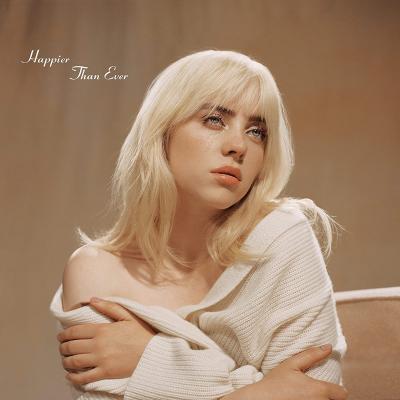 It's been just two years since Billie Eilish's debut, the uniquely untamed When We All Fall Asleep, Where Do We Go?, but a lot has happened in that time. Global pandemic aside, Billie Eilish became an adult, and while the tongue-in-cheek idiosyncrasies of her teenage self are still firmly present, she's spent a lot of time self-reflecting on her body, fame, and the pressures of being a public figure. This all lends itself to the deceivingly subdued Happier Than Ever, a challenging sophomore effort that strikes a balance between sarcasm and self-awareness, combining the vintage tones of her idols (Amy Winehouse, Frank Sinatra) with the futuristic pop landscape she continues to shape. At 16 tracks, the album could lose a couple of repetitive moments ("Everybody Dies," "Male Fantasy"), but otherwise, Happier Than Ever is the kind of album that rewards repeat listeners. While the songs move at a mid-tempo pace, a run like "Billie Bossa Nova," "my future," and "Oxytocin" finds the singer-songwriter never attempting the same style twice, from the titular Latin groove of the first to the primal, Nine Inch Nails-esque electronica of the last. While lacking the immediacy of her debut, the growth on an album like Happier Than Ever is self-evident; all it requires of listeners is a fair shake.