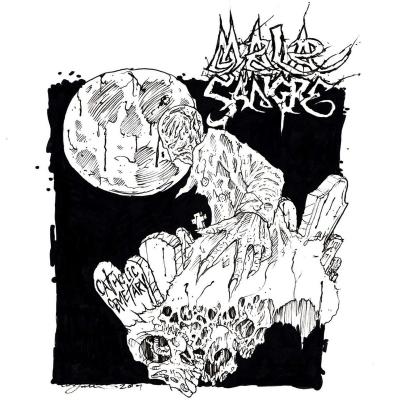 Four stars out of five

Mala Sangre, a hardcore punk trio from Erie, return with their shortest and most intense release yet. Mala Sangre have been playing blisteringly fast punk since they released their debut album in 2010 and are one of those rare beasts that have stayed together and retained their original lineup. Catholic Cemetery is a testament to a band that knows how to play together, fast and tight. Mala Sangre is also known for having some of the area's best punk and metal performers lend a hand, and this album is no different. Guests include vocalists Morbid Rob (Maniacal Device) spewing truth on "Lawless Town'' and "Experiment in Fear," Cameron Rivera (Massive Denial) on "No Scene" which deals with the struggles of an independent band, and JC Nickles on "Rude Awakening," a song that is reminiscent of early Descendents material. There is also some additional lead guitar work from Geoff Radiszewski (Requiem For Oblivion), Cameron Rivera, and Brian Gloskey, who also recorded and produced Catholic Cemetery. What can be said about Mala Sangre is the same thing that has been said about the Ramones and Motorhead — when you buy their records, you know what you are going to get and you are never disappointed.