Self-released 4 stars out of 5 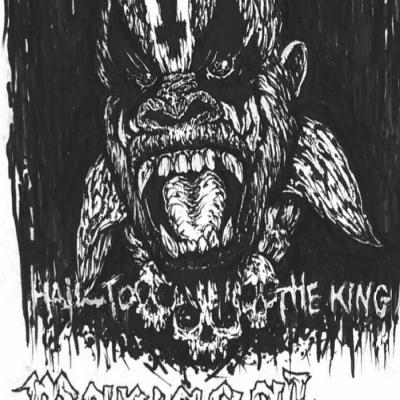 Erie's crossover thrash punks return with a new EP called Hail To The King. In true crossover fashion, these songs are short and fast. Much like D.R.I.'s Dirty Rotten EP, the songs on Hail To The King run under the two-minute mark with a total time of ten minutes. These songs were originally recorded during their sessions for Ugly Sound - Super Rare Japanese Import in 2018 for Presque Isle Records. This is being released through their Bandcamp to appease their fans' appetite for thrash until they can play clubs again. The set is touted as having been recorded live via satellite on Skull Island in 1986. This type of humor aligns with frontman "Morbid" Rob Burke's crass and witty lyrics, which often reference vintage horror movies, some so obscure that even the most hardcore horror fan wouldn't have seen them. Standout tracks are "La Bete" about a 1975 French exotic horror film, "Two Times Dead" about killing the undead, and the title track "Hail To The King," a reference to the eighth wonder of the World, King Kong. These songs are all killer and no filler with tight riffs and solid breakdowns.

To order, go to maniacaldevice.bandcamp.com