Gary Clark Jr., And You Will Know Us by the Trail of Dead, Green Day, and Bat for Lashes, reviewed by Bieler and Ben. 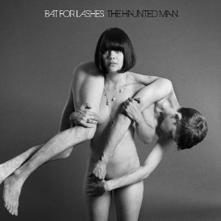 While Natasha Khan may not be the most well-known artist, music critics are quite aware of her stage name Bat For Lashes. With two full-length efforts behind her, Khan has garnered a pair of Mercury Prize nominations for best album from the United Kingdom and Ireland. Armed with her haunting, yet danceable style, Khan trots out "The Haunted Man," her latest album. The results, however, are a bit underwhelming. A big strong point of Bat For Lashes has always been Khan's Kate Bush-like vocals, which are as strong as ever of "The Haunted Man," but this time around, the arrangements built around her voice aren't nearly as strong. While the sparse piano and slight horns of "Laura" draw you in, songs like "Horses of the Sun" lack that connection. Still, "The Haunted Man" is lovely enough to forgive some of these flaws. - Alex Bieler 3.5 Stars

Despite not even having reached his 30s yet, Gary Clark, Jr. has piled up an impressive number of famous fans. The Texan bluesman has already earned praise from Eric Clapton, Roger Waters, and more, all before the release of his major label debut "Blak and Blu." While he's known for his muscular blues riffs, "Blak and Blue" shows that there's more than just a rock vibe in Clark's veins. Album opener "Ain't Messing Around" gets straight to work, with the up tempo track's power chords and brass section being catchy enough to be TV commercial-worthy. "The Life" tosses in some bright, breezy hip-hop into the mix, but Clark truly shines on his deepest blues cuts.  Songs like "Bright Lights" and "When My Train Pulls In" really showcase Clark's soulful guitar and Auerbach-ian vocals, providing enough muscle to provide a nice shade of "Blak and Blu." - Alex Bieler 4 Stars

…And You Will Know Us by the Trail of Dead

After spending the last few albums leaning more towards prog-rock, Austin, Texas outfit …And You Will Know Us by the Trail of Dead returns to a more punk-leaning sound on their latest album "Lost Songs." That's not to say that Trail of Dead doesn't mix some artier flair in with this newest batch of tunes, but the group sticks with urgent drumming and chugging guitar, sprinkling in occasional prog influences throughout the album. With the brisk pace of "Lost Songs," Trail of Dead is able to grab your attention much more when they finally do slow down, which works to great effect on "Pinhole Cameras" and "Up To Infinity." While the album bogs down a bit in the middle, Trail of Dead recovers nicely with the oddly pretty "Awestruck." "Lost Songs" sometimes races ahead of itself, but it puts the brakes on often enough to be rewarding. - Alex Bieler 4 Stars

After their last two albums ("American Idiot" and "21st Century Breakdown"), a fair question to ask Green Day would be: Why so serious? Prior to those releases, the band churned out albums with little direction ("Nimrod") but notable tracks ("Good Riddance") and albums ("Dookie") filled with punk-powered tunes that captured the post-Cold War spirit of the '90s ("Longview"). But then came "Idiot" and "Breakdown" – two concept albums that showcased the band's maturity and talent, proving to be their most ambitious work to date, as well as their most successful. So it seems fitting to follow those efforts with a three-disc release. But look no further than that. "Uno!" the first of the trio, returns to the directionless, punk-pop of the Green Day of yesterday. And it's a nice reprieve, proving the band can still write good ol' fashioned catchy punk-rock hooks and riffs without preaching.  - Ben Speggen 4 Stars