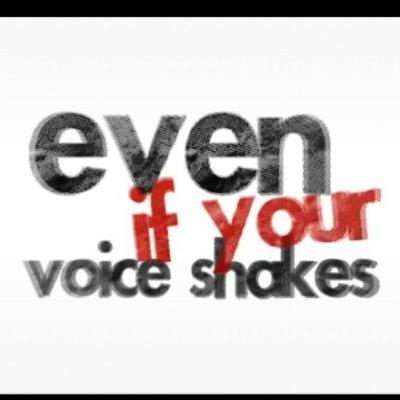 Even If Your Voice Shakes

What do you do after winning Album of the Year at the Rock Erie Music Awards? Well, you put out another one. Local pop stars The Romantic Era returns with 16 new tracks on "Even If Your Voice Shakes" right after taking top honors at the last REMAs with their self-titled effort. On the latest round of tracks, the seven-piece outfit brings in several guests such as Lethal Trend and Varcity with varying degrees of success. While "Intro" and "Outro" both sound out of place, songs like "One Shot" and "Bodyguard" hit the spot, providing excellent nuggets of pop bliss with nice touches like pizzicato strings and "Hold Me Tight's" metronome. "Even If Your Voice Shakes" is long, tipping the scales at over 54 minutes, which could have been helped by chopping a few of the weaker tracks, but there's enough substance throughout to warrant your attention.  -Alex Bieler 4 Stars

Earlier this year, Neil Young took The Horse out to play in the field. Rather than displaying any new tricks, The Horse and its jockey performed a routine of "Americana" already familiar to listeners. But The Horse didn't go back to the stable when the performance was done. Instead, Young and The Horse came out riding harder – and better – with an all-new routine: "Psychedelic Pill." But a familiarity in sound remains; the music is chunky, clunky, and classic garage-band Young – unrefined and unforgiving, unbridled and unadulterated rock 'n' roll. Heavy distortion and whammy bar glory adorn the often simple three-chord progressions here ("Ramada Inn") while most of the lyrics focus on Young's obsession with aging ("Driftin' Back"). Young and The Horse prove they haven't faded away and aren't about to burn out – they're here, and they're rocking so enjoy the ride. -Ben Speggen 4.5 Stars

If the name Crystal Castles makes you think of darkness, pain, and aggression, then it's likely you've heard of the Canadian-bred experimental electronic duo of the same name. With the latest album, another self-titled effort referred to as "(III)," Alice Glass and Ethan Kath continue their bleak mix of dark synth washes and pop sensibilities in abrasive fashion. While not necessarily inviting on first listen, "(III)" is jam-packed with twitchy, catchy beats that drive Glass's bleak vocals forward. Songs like "Plague" and "Kerosene" blend a sense of loveliness in with all the grit, painting a pretty sonic picture before clawing away at the canvas, while "Child I Will Hurt You" presents a softer side to the duo. Ultimately, "(III)" is a murky adventure into the middle of a nightmarish setting, which isn't always a bad thing in the music world. - Alex Bieler 4 Stars

After decades of being in the center of the D.C. music scene, Ian MacKaye still holds the fire that fueled his days in Fugazi. While the beloved punk band has been on hiatus for a decade, the now 50 year-old MacKaye can still work some tricks with his guitar, as evidenced on The Evens' new album "The Odds." The band, which includes Amy Farina, his partner and fellow D.C. music veteran, creates an effective stripped-down version of their punk sensibilities without losing that edge that drew listeners to their previous endeavors. "Wanted Criminals" is the closest we get to a Fugazi flare up, with a fast-paced riff leading the way. Even without the duo's fiery lyrics, the excellent instrumental piece "Wonder Why" rocks with nary an electric guitar. MacKaye may no longer be the youth of bands before, but The Evens can still fire you up.  - Alex Bieler 4 Stars

by Nick Warren16 minutes ago