Alex Bieler and Ben Speggen try to make sense of yet another Sufjan Stevens Christmas album, the somewhat-triumphant return of Soundgarden, Memory Tapes, and Punch Brothers. 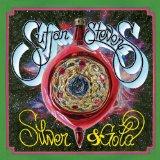 Six years after releasing the 42-track "Songs for Christmas," Sufjan Stevens decided that the Christmas season needed another massive box set. Now, when I say that the new five-disc collection "Silver & Gold" is huge, I mean it. With a runtime slightly longer than "The Dark Knight Rises," "Silver & Gold" certainly doesn't skimp on quantity. However, the 59 tracks, comprised of retooling of classic Christmas tunes and original compositions, have quite a few chunks of coal among the occasional pieces of gold. The first disc is the most traditional of the five, but the second disc, entitled "I Am Santa's Helper," is a musical mess, notably the unfortunate "Ding-a-ling-a-ring-a-ling." There are some bright spots among "Silver & Gold," such as "X-mas Spirit Catcher" and "Alphabet St.," where Stevens employs his usual oddities to great success, but there aren't quite enough highs to outweigh the lows.    Alex Bieler 2.5 Stars

More rock than Nirvana, more methodical than Alice in Chains, and more metal than Pearl Jam, Soundgarden - one of the four pillars of the '90s grunge movement – seemed, well, less grunge than the rest but fit the movement with lyrical stylings and content. The band saw success – the first grunge act to sign with a major record label – peaking with 1994's "Superunknown" before breaking up in '97. After a string of solo gigs and work with other projects, the band reunited in 2010 to release 2012's "King Animal." Aside from lead single, "Been Away Too Long," finding another standout track is difficult, as most sound like fodder for any of their previous work – although there are splashes of contemporary influence with "A Thousand Days Before" baring resemblance to Awolnation's "Kill Your Heroes." A solid grunge effort, "Animal" satisfies but fails to stir up much of anything you haven't already heard.  - Ben Speggen 3 Stars

While not intentional, the name "Grace/Confusion," Memory Tapes's latest album, almost describes the reception to Dayve Hawk's first two albums under his current recording alias. While debut album "Seek Magic" won over critics, Hawk's follow-up effort "Player Piano" left reviewers shaking their heads. On "Grace/Confusion," Hawk falls somewhere in between. While only six tracks long, the album still spans just under 40 minutes. Each track shifts in both mood and tempo, although some tracks, like the first halves of "Neighborhood Watch" and "Let Me Be," meander to the point of disinterest before hitting their peaks. When they do evolve, the songs make an impact, although Hawk's propensity to add in sprinkles of chintzy sound effects detracts from the otherwise impressive portions of the album. "Grace/Confusion" has its moments, but it doesn't have nearly enough magic to forgive all of the flaws.  - Alex Bieler 3 Stars

The members of Punch Brothers sure do love their covers. Fans of the progressive bluegrass quintet are quite aware of the numerous tunes the band will whip out on tour, with songs ranging from Radiohead's "Packt Like Sardines in a Crushd Tin Box" to "Lovefool" by The Cardigans. On "Ahoy!," the group's latest EP, the band adds three more covers in a five-song bundle of goodness. The EP kicks off with a faithful rendering of Josh Ritter's "Another New World," with the band's five virtuosos building the songs into a bone-chilling climax. After that, the Punch Brothers speed up Gillian Welch and David Rawlings's "Down Along the Dixie Line" before tackling the traditional folk piece "Moonshiner." Where "Ahoy!" truly shines is on closer "Icarus Smicarus," keeping the intensity of the bitter Mclusky tune. All in all, a fun EP that Punch Brothers fans will love.  - Alex Bieler 4 Stars