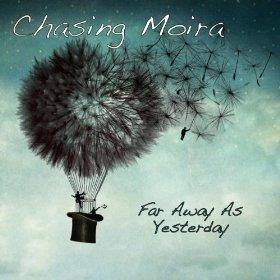 Far Away as Yesterday

While Moira's Sophomore LP may not start with guns a-blazing, songs like "Hey You" and "Now It Seems" are right on target. With undertones of the Chili Peppers, Sublime, Dave Matthews, and Incubus, it's hard to go wrong. What really comes through in this album is the mastery of each member's instrument. "Reminder," "Coffee Shop," and "Never Said," have some seriously rockin' instrumentals that are sure to catch your attention.  Although, at times a yearning for more sophisticated lyrics is felt. With dissident melodies throughout the album, "Far Away as Yesterday" could chase away the pop-seasoned ear, but if you're looking for some quality composition, this will do. An acquired taste – much like their big brother Dave Matthews – Chasing Moira's album is worth a listen. Lastly, with 11 tracks – only 10 are listed – it's good to see the band has a sense of humor. – Matt Flowers 4 Stars

With Blur, the future is a mystery. With "Parklive," the recording of their Olympic Closing Ceremony Concert performance at Hyde Park, it can sound like a definitive celebration of a band at the end of its career and a launching point for a new creative period all at once. As for what's to come, I don't know, you don't know, hell, even Damon Albarn doesn't seem to know. What I do know is that "Parklive" packs 25 Blur tracks ranging from instantly recognizable and some of their lesser known cuts that will please the obsessed fans. With 80,000 backup singers in front of the stage, Blur runs through different stages of their career with some slight signs of age, but by the time Albarn wishes the crowd a genuine "thank you" during to rousing close to "The Universal," we can only hope that there's more in the future. - Alex Bieler 4.5 Stars

In "Driftin' Back," Neil Young sings, "I'm driftin' back… Don't want my mp3… When you hear my song now, you only get 5 percent – you used to get it all." Young's commentary fits our culture: with myriad songs digitized courtesy of the app du jour, we can feverishly devour sounds, often without contemplating the artistic process, with the days of sitting, sifting through liner notes gone. Fret not, Neil – Beck to the rescue! Here, Beck offers his most experimental work yet: music that the listener/reader/player must produce to enjoy. "Song Reader" features 20 songs that all sound, well, however you'd like to interpret them – as long as you play piano and have a friend good with a guitar. Noble in nature – forcing listeners back to the root of music being circulated as pamphlets – Beck's efforts remind us that artists are still innovative and are still in pursuit of something special. – Ben Speggen 3.5 Stars

The Defenestration of St Martin

After enjoying a success during the Britpop explosion as the frontman for Gene, Martin Rossiter spent much of the time after the group's 2004 tutoring others before returning to his own tunes. On "The Defenestration of St Martin," Rossiter certainly sounds as if he's fallen from some grand heights, but certainly not in terms of musical quality. Armed with merely a piano on most of the album, Rossiter fills the silence with deftly played ballads, built around his Morrissey-esque vocals. If the sparse instrumentation doesn't truly pull at your heartstrings, Rossiter packs enough emotionally draining lines to show the depth of his lows, much like in "Three Points on a Compass" when he denounces the father that left him, singing "the only thing I got from you was my name." Rossiter may feel like he's fallen, but "The Defenestration of St Martin" is a welcome return. - Alex Bieler 4 Stars