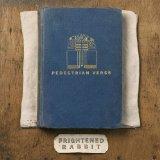 Frightened Rabbit
Pedestrian Verse
Atlantic Records
When it comes to following up a pair of excellent records in "The Midnight Organ Fight" and "The Winter of Mixed Drinks," one would think the members of Frightened Rabbit would be likely to follow the same formula used in the past for their latest release. Well, frontman Scott Hutchinson decided to change up the process on "Pedestrian Verse," forcing himself to write about other characters instead of drawing from within. The result marks much of the same elements that made Frightened Rabbit old great, but now with some new twists. The Scottish glumness of past remains, all wrapped in lyrically dense tunes that feel both revealing and defiant, as demonstrated when Hutchinson belts "There is nothing wrong with me" on "Dead Now." These new tunes swell more than songs of past, evident in the gorgeous "State Hospital," part of the success of these more-than-pedestrian verses.  ~ Alex Bieler 4.5

Strangers and Liars
Five Seat Concert Hall
Self-released
Normally, outsiders and phonies don't always make the best company (unless you work in D.C., hey-oh!), but the good guys behind local rockers Strangers and Liars are luckily neither. Led by vocalist and guitarist Tommy Link, the four-piece unit of Link, drummer Tom Hitt, lead guitarist Justin Anderson, and bassist Russ Straub has come together to release "Five Seat Concert Hall" for our entertainment. Drawing largely from some good ol' rock 'n' roll from some decades ago, specifically Tom Petty and the Heartbreakers, the band whipped up 10 songs of nostalgia without the old memories. Not all the songs stand equal, as some songs feel longer than their play time would indicate, but the highlights, such as the dreamlike "Dull Razors" and "Letters" show off Link's vocal and lyrical abilities, leaving the album feeling as intimate as an actual five-seat concert hall.  ~ Alex Bieler 3.5

My Bloody Valentine
m b v
Self-released
After the wait for My Bloody Valentine's follow-up to their beloved album "Loveless" hit the double digits in years, the appearance of the band's new album was akin to that of Bigfoot or Nessie – something with small signs of existence, but no proof of it being real. In fact, there are some people that were born after "Loveless" was released that are now of the legal drinking age. After 22 years the wait is finally over, and "m b v" doesn't disappoint. The beloved shoegazers step right back into their comfort zone, as opener "She Found Now" welcomes listeners in with a sonic wall of guitars drenched in reverb, as Kevin Shield's whispered vocals float amongst the dreamlike setting. From there, the band slowly shifts from laid-back droners to aggressive squalls and choppy percussion. It may have taken a few decades, but "m b v" makes for a wonderful late Valentine.   ~ Alex Bieler 3.5

Jim James
"Regions of Light and Sound of God"
ATO Records/ RED
Influenced by Lynd Ward's "Gods' Man," a 1929 Faustian account of an artist selling his soul for fame and talent, Jim James opens "Regions" with "The State of Art – A.E.I.O.U.," a critique of technology's effect on art. James' voice takes center stage – think: MOF's "Dear God," not MMJ's "I'm Amazed" – as he reduces the chorus to mere vowels, presented in and out of order, then singing, "I used the state of the art – technology," later followed by "The power's going out," distorting the word 'power' more each time until the song ends. James' Bono-esque tenor shines on "Know Til Now" and the guitar work of "Of the Mother Again," reminiscent of Dave Davison's work on "Old Ash," offers a welcomed reprieve from the piano- and keyboard-heavy album. James' debut solo effort, "Regions" plays more as one flowing song with movements, drawing eloquently from his past and illuminating his future.  ~ Ben Speggen 4.5