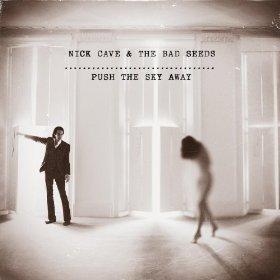 After the raucous last showing of 2008's "Dig!!! Lazarus, Dig!!!" and the thunderous wild-child side project that was the now-defunct Grinderman, one could fairly expect that Nick Cave's 15th album with the Bad Seeds would continue along the path of loud and horny. While elements of the latter remain on "Pushing the Sky Away," Cave eschews the roaring guitars for a slower burn. From album opener "We No Who U R," we see that on this new album, Cave has, for now, moved past the heavy volume attacks, even sounding quite lovely at times. Still, an underlying menace leaves even the sweeter tracks unsettling and fascinating. While there are times that you wish that a rousing climax would turn up ("Water's Edge"), songs like violin-aided "Jubilee Street" and the Hannah Montana-referencing journey of "Higgs Boson Blues" build magnificently. For a 30-year-old band, Nick Cave & the Bad Seeds sound as fresh as ever. ~ Alex Bieler 4.5

Back in 2010, Darwin Smith released his self-titled debut as Darwin Deez, an indie-pop treat that made for an excellent little set of tracks to blast when you could finally keep the windows down without fear of freezing over. That album was filled with plenty of insanely catchy tunes with just the right mix of quirkiness to keep them memorable. Fast-forward to 2013, and it appears Deez has changed a bit. While I do appreciate something new, mixing things around to break up the Mumfordian monotony, "Songs For Imaginative People" tries way too hard to be clever. Before, the quirky lines sound unforced and fun, but new lyrics like "I love you are horrible" on "You Can't Be My Girl," an otherwise enjoyable song, just don't work. Songs like the sweet "Chelsea's Hotel" show Deez's promise, but the new album leaves you cold at times. ~ Alex Bieler 3

It doesn't take too long when listening to "Holy Fire" before you notice something is a little different on Foals' latest album. Just two songs into the new release, the British quintet seems darker than before, a roughness in their music that wasn't previously present. Opening track "Prelude" sets the stage with a mostly-instrumental building of dynamics that stop and start just enough to lull the listener in before lead single "Inhaler" steps in, a dance-inducing track that builds before it hits you with a growling riff. After this two-track foray into rougher sonic terrain, Foals is content returning to familiar territory with highly-catchy melodic tunes that feel more spacious than the twitchy tracks that began the album. It's all quite well-done, although "Holy Fire" is never able to ascend quite a high as that first two-track taste. ~ Alex Bieler 4

Let's be clear: This isn't The Smiths. Nor is it Modest Mouse. Nor The Cribs. And The Smiths aren't getting back together, and Marr's on his own here – pure Marr: the godfather of the indie-rock guitar. On "The Messenger," his debut solo album, Marr doesn't offer anything we haven't heard. Instead, he stacks together a lifetime's worth of sound in 12 tracks, and this album is all about the guitar. From marching melody and thick-picking of "Upstairs" to the surfer-inspired wails of "European Me" to the liquid splashes of steely guitar on "Sun and Moon," to the tremolo-laden, New-Wave-esque reverb of "The Crack Up," to the jangly-clank of "Word Starts Attack," his past peppers the tracks and fuels the album's movement. Marr displays his entire catalogue of guitar work, which entertains, but he disappointingly plays it safe with the vocals, never stretching beyond a comfortable, minimal range. ~ Ben Speggen 3.5