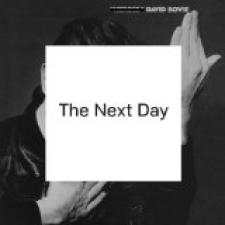 David Bowie
The Next Day
Iso

After 23 studio albums, a multitude of personas, and immense critical and commercial success, David Bowie has nothing that he needs to prove to the music world. Still, that doesn't mean that he doesn't still want to be heard. On his first album in a decade – and first since a 2004 heart attack that had seemingly pushed him to retirement – Bowie doesn't take a new form as much as effortlessly mold his previous personas together into one collective piece. That doesn't mean that "The Next Day" sounds like a recap, mind you. Bowie, while admittedly older, can still wail away, providing new bombast amongst the songs. Of course, the album doesn't come near touching his classics, nor would we expect it to, but the fresh batch of tunes mixed with touches of old, like the drumbeat from "Five Years" on "You Feel So Lonely You Could Die," make for a welcome return. ~ Alex Bieler 4

Nearly 20 years after the dissolution of Uncle Tupelo, the careers of the band's main minds, Jeff Tweedy and Jay Farrar, have gone in two different directions. While Tweedy and his band Wilco have gone on to release a string of critically-beloved albums, you don't hear about Farrar's Son Volt nearly as much anymore. Wilco may have taken the alt-country of Uncle Tupelo and began experimenting with it, but Farrar and Sun Volt went back in time, sticking with folk-country tunes about the little guys of America. "Honky Tonk," Sun Volt's latest album, focuses in on the Bakersfield sound of the '60s, kicking off the album with a nice waltz in "Hearts and Minds," with touches of pedal steel and fiddle livening up the tune. After that, however, it's a healthy dose of the exact same safe country croon, leaving "Honky Tonk" a rather boring affair. ~ Alex Bieler 2.5

Since the release of his debut album back in 2011, Trevor Powers, who performs as Youth Lagoon, has moved on to bigger things – quite literally – leaving the home recordings in Boise, Idaho for a studio in Atlanta to work on his sophomore release "Wondrous Bughouse." You can hear the change in the album, as this new batch of songs sound bigger, and more confident than those from just two years ago. Powers creates a dreamlike world on "Wondrous Bughouse," at times channeling both Deerhunter and even Sigur Ros on the ear-pleasing "Mute." While fun and fanciful at times, Powers manages to mix an ominous feel amid in his music, singing about unanswered pleas and a lack of self-worth in his childlike voice. Although some of the production touches and vocals are lost in the mix, it all adds up to an impressive sonic landscape. ~ Alex Bieler 4

A concept album driven by relationships, angst, frustration, liberation, happiness, hatred, and any other feeling standard to pulsing punk-pop peppered with fem-rock spices throughout, "Girl Talk" gives listeners both old and new Kate Nash. The old populates the album's lyrics, as Nash delivers an album shrouded in a mist of confusion, most clearly seen in "Rap for Rejection," a candid observation on the complication of relationships. But the music here is more complex than her previous works. The surfer guitar on "Death Proof" adds dimension to her rants and raves, and the melodic pairing of Nash's vocal and guitar on "Are You There Sweetheart" gives the album a necessary tenderness that contrasts Nash's screeching in tracks like "Sister." "Conventional Girl" and "OMYGOD!" epitomizes the album – one, featuring delicate swirling backing vocals that open to a thrashing Nash, and the other, a dynamic, jerky shift in pace without warning or reservation. ~ Ben Speggen