All An Act Hosts Squabbles 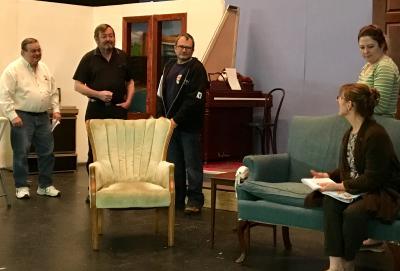 No need to fight over tickets to All an Act's latest production, Squabbles, as there will be enough laughs for everyone. The show, which kicks off this Friday, centers around a relatable story — in-laws who just can't seem to get along.

Erie's showing of the comedy by Marshall Karp is directed by Chris Bucci. Though this is his first time directing for All an Act, Bucci has been involved in over a dozen All an Act Theater productions, including the theater's very first, Funny Money, in 2004.

This raucous play follows the challenging relationship of Abe — the father-in-law of main character Jerry — and Jerry's mother, Mildred. Different circumstances force both Mildred ( played by Lisa Simonian) and Abe (Larry Lewis) to take up residence with Jerry (Michael Burns) and his wife Alice (Amanda Hurd), a successful lawyer. And now that they're there, they can't stop fighting. Each scene depicts the pair comically confronting each other for one reason or another, until they ultimately find common ground.

"When I first came across Squabbles, I genuinely enjoyed reading it," Bucci said. "I also found myself wanting to come back to it numerous times … It had a Neil Simon-esque feel to it in the dialogue and rhythms, while also being wrapped-up in an episode of Everybody Loves Raymond," Bucci continued. "That sitcom feel was very appealing to me and a major reason it stood out. It was very relatable, funny and, at times, heartwarming."

Bob Dombrowski stars as Sol, a retired pharmacist and friend of Abe's. Additionally, Hector Lopez — a handyman and friend to Alice — is played by Dave Dicola, and stern governess Mrs. Fisher is played by Shantel Kay. — Hannah McDonald

One dollar of every paid admission goes to Community Shelter Serves, an organization committed to supporting Erie's homeless population and those at risk for homelessness.

All An Act Presents: Squabbles