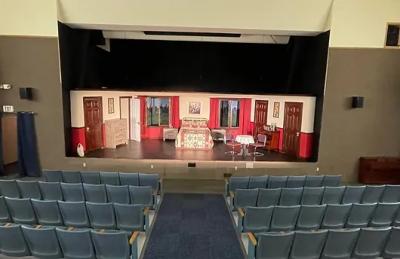 UPDATE: Due to an unforeseen technical problem with their set, All an Act is postponing performances of "The Play That Goes Wrong" until November 4.

One hundred is a big milestone by any reckoning, whether you're celebrating 100 years of life or 100 years in business.

Or, in the case of the All An Act Theater in Erie's Little Italy neighborhood, the 100th production to hit the stage, and this one is a showstopper.

Directed by David W. Mitchell, AAA is pleased to present The Play That Goes Wrong, a 2012 comedy written by Henry Lewis, Jonathan Sayer and Henry Shields, and winner of Best New Comedy at the 2015 Laurence Olivier Awards.

It takes place on opening night of the Cornley University Drama Society's latest play, The Murder at Haversham Manor, a murder mystery set in the 1920s; the production is the result of a significant bequest, made after the company has triumphed with such hits as Cat and James and the Peach.

The show-within-a-show quickly goes awry, though, from a wobbly set (which does not make it to the end), to a cast who forgets its lines, to a leading lady who gets knocked unconscious and a replacement who won't yield the part when she returns.

"It's divinely daft, gloriously preposterous and utterly silly," writes the London Theater in its four-star review.

Opening nights can be rough, of course, but as All An Act Theater celebrates its 100th production and 100th opening night — well, we can hope they're a mite more successful than the Cornley University Drama Society.