All An Act's 'The Crucible': Terrifying, Tragic and Timeless

The Crucible is about to take over All An Act. 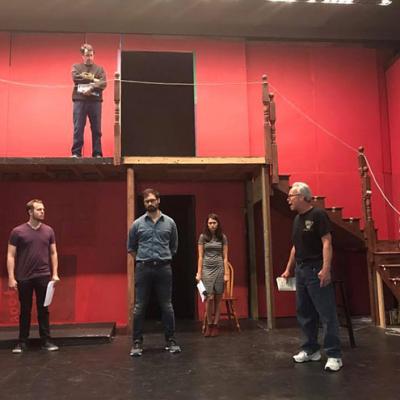 The year was 1953. Joseph McCarthy, a senator from Wisconsin, had begun his reign of persecution in 1947, accusing everyone from government officials, to Hollywood movie stars, to university academics of Communism and Soviet-sympathizing. Playwright Arthur Miller debuted his latest piece, The Crucible, in January of that year, a condemnation of McCarthy's scare tactics and power. It would go on to win the Tony Award for Best Play and become a standard in the American theater canon. But is it still relevant today, over 60 years later?

"In my view The Crucible will always be a play about current political situations somewhere. That's what truly makes it timeless," J.D. Mizikowski, director of All An Act Theater's latest and penultimate production of the 2017 season, told me. The Crucible portrays suspicion, fear-mongering and vengeance in 17th century Puritan New England, yet we see these reactions bubble to the surface time and again over the centuries.

The chief pot-stirrer in this piece is Abigail Williams, whose jealousy and bitterness after being spurned by her erstwhile lover John Proctor takes on monstrous proportions; but for all that, the character is still a three-dimensional human. Mizikowski spoke with great confidence in his Abigail, played by high school student Audrey Ward. "The thing that Audrey [also] really gets is not just the jealousy but the self-righteousness; she really thinks that by calling out those she views as hypocrites she's doing good."

So what can we learn from watching a sanctimonious figure gain power and influence over the masses by inciting fear and hysteria?

"Empathy for everyone," Mizikowski said. He continued, "Only by giving ourselves over to these types of experiences in the theater can we hope to make any progress." — Cara Suppa