All in the Family: Hereditary

Hereditary is a Near Masterpiece 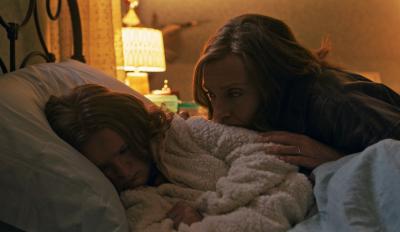 What has been going on with horror films lately? For the last five years, a new batch of independent horror movies has been cropping up that have been beautifully shot, masterfully directed, and frankly, scary as hell. Ari Aster joins in this new wave of smart, mature horror films with his audacious debut feature Hereditary ... and it may be the best one yet.

The film follows a series of unfortunate events that begin to occur to a family in the weeks following the death of their reclusive matriarch. As these events become more and more horrifying, the mother (Toni Collette) begins to learn of her family's dark secrets as well as a terrible fate that her children may have inherited.

As a horror story, it couldn't be simpler but in its simplicity the film is able to make some interesting points about the pain of losing a loved one, the struggles of dealing with mental illness, and the fear that said illness may be passed down to family members. Hereditary also looks beautiful with ominous, gliding camera work and pitch-perfect lighting that in a just world would already guarantee this film's Best Cinematography Oscar. The horror world is often overrun with cheaply produced trash that gets by solely on loud noises and jumpscares. Hereditary scares more with a simple reaction shot than a million jumpscares could ever hope to do. In fact, if not for an ending that I disagree with on an artistic level, I would go so far as to call it a new horror masterpiece! — Forest Taylor