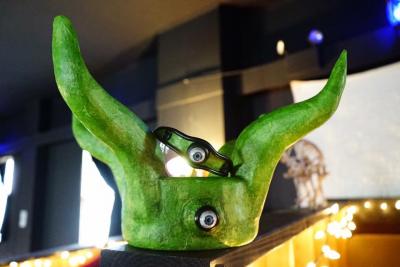 It's time again for Basement Transmissions' Toxic Prom, with this year's theme being a psychedelic trip down the rabbit hole , a la Alice in Wonderland.

As is custom with the Toxic Prom, attendees are encouraged to dress in costume related to the theme (lest they face judgment from the Queen of Hearts), with a Toxic King and Queen being crowned at the end of the night.

In addition to focusing on local music, the sixth annual Toxic Prom is also putting a focus on local artists. "This year we have BT's Art Club involved in the decoration process, so visually it's going to be way better than ever before," says Bob Jensen, the venue's owner. "Plus, I have them making the Toxic Treats, so they will be better than ever too,"

The headliner for Toxic Prom, Wave Trails, with their experimental, psychedelic rock stylings, is a perfect fit for the night's theme. "Those dudes are not only my favorite band from the area currently, but they will take these kids further down the rabbit hole than anyone else could," Jensen says.

Erie's heavy music scene has lacked representation at Toxic Prom in previous years, but this year Human Delusion (previously known as Primal Scream Therapy) and Shattered Utopia are holding it down for Erie metal and hardcore music, respectively. Human Delusion released their debut album Depravity, this past January, while Shattered Utopia is currently recording their debut release.

The rest of the bill is a faithful and well-rounded representation of the overall music scene in Erie. Some of the best acts in each genre will take the stage, including the alt-rock/pop stylings of First to Eleven, the blues-inspired punk rock of Paper Matches, the pirate-themed, swashbuckling folk punk of The Stormalong Scoundrels, and Erie's youngest hard rock band, Fill in the Blank.

The second stage will feature acoustic and hip-hop acts, including Killer Clinton and All Gore, Georgia Buchner, Dezzy Call, Lil Avril, and Dagger.