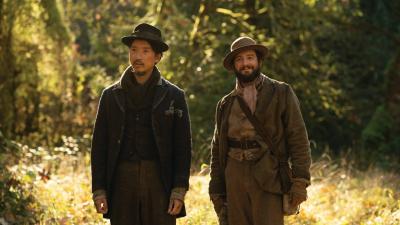 Film fans may come to remember 2020 as "the year without movies" as theaters locked their doors through most of the year and many films found their release date either moved back or cut short. Many of them found a home on VOD, but others were held in limbo for months on end. One of those films was Kelly Reichardt's First Cow, easily one of the best films of the year. Reichardt proves once again that she is the best chronicler of close, intimate friendships set against the wild, untamed beauty of the American Northwest.

The story centers around Cookie (John Magaro), a cook traveling with a group of fur trappers through Oregon Territory in the 1820s. On the trail, Cookie strikes up a friendship with King-Lu (Orion Lee), a Chinese immigrant searching for his fortune and the two go into business together, making and selling fried dough balls to fellow travelers. However, their business relies on the milk of a wealthy landowner's prized cow, a fact that could endanger their lives if the owner found out.

Ostensibly a Western, the film goes beyond the tired cliches of the genre and instead, much like Robert Altman's McCabe and Mrs. Miller, presents the untamed West as a place ripe for capitalistic exploitation. However, it is also a place of untapped opportunity as these two men find a path to success that a more "civilized" world might have denied them. Like her earlier films like Old Joy and Certain Women, this is also a tale of a close, platonic friendship. Magaro and Lee give us two people who need each other to survive in the harsh world. And that is a tale that is worthy of an American myth. — Forest Taylor