An Art Review for Friends

Critiquing the critics of his criticism isn't Pen's bag. But reviewing Run for the Roses at Glass Growers Gallery is. 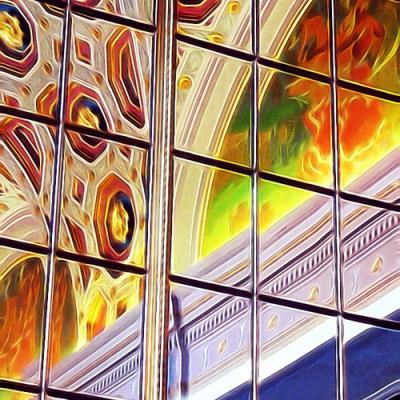 Since taking over as the art critic of the Reader, I've gotten many comments and suggestions on my writing. Critiquing the critic is a time-honored tradition. One thing I've noticed from all the feedback: people love a review that doesn't pull any punches. They want me to tell it like it is, even if that means shredding the egos of an artist or two. The people who read The Reader want their journalism to be brutally honest. They are tired of the puff pieces from reviewers that spout nothing but happy banal marketing platitudes.

I'm cool with that. Far be it from me to critique the critics of my criticism. I was never good at marketing anyway – just ask the guys at the ad agency I used to work for.

But being derogatory is generally not my nature. There have been shows in Erie that I have avoided reviewing because I don't want to seem caustic. I'd rather recommend that you go see a show than not go see a show. But you, my readers, deserve to get what you want sometimes, so I pledge to write discriminating, raw, and soul-crushing reviews more often...

Not today though! Here, I picked a show I knew I would like because I am intimately familiar with the work of one of the artists. So unfortunately for you, you will just have to wait for an angry rant about how cynical and corporatized the art world has become for another day. Today, you get to read good things about good people. If this is not your cup of tea, stop reading now and go peruse the elegant discourse in the comments section of your favorite YouTube video. There, you will surely find some entertaining feedback more to your tastes.

In the spirit of honest journalistic disclosure, you should be aware that I knew I would like Mary Rosiak's show at Glass Grower's Gallery because she's my former high school art teacher. She's also been a good friend and mentor to me since those days. I've been following her career for thirty years, so I knew what to expect before I walked in the door. In fact, I was present during the creation of one of her pieces, a three-dimensional shadow-box collage featuring bold photographs of flowers called Run for the Roses that she started at a demonstration on collage techniques she was giving one evening.

A lot of the gallery at Glass Growers in filled with similar images: Behind the glass (but often in front of the mats) are meticulously cut out and placed iconography, arranged with depth in mind. The arrangement of elements within the enclosing frame is always structured to lead you into and back through the space. After teaching the principles of design to thousands of students, Mary has become a master of composition. She uses this to great effect to call the viewer's attention to the important objects she has photographed to be the centerpieces of each composition.

The subjects we see in these constructions are symbols that Mary holds dear, which we as viewers should see and know more intimately. Flowers and fish have long been staples of her symbolism, but her recent travels with her sister have opened up new avenues of expression. Arizona's deserts and ancient adobe churches have given her new devices to feature in her work. She fell in love with The White Dove of The Desert Church near Tucson, where the power of the icons for the parishioners had a profound effect on her. One large photomontage, By Your Cross and Resurrection, features that Church's crucifix. You can see where the paint has worn away on Christ's legs where thousands upon thousands of hands have touched this sacred relic.

One of Mary's motivations for showing us the beauty of sacred objects in a new light is to bring us deeper into a personal understanding of those objects. She also includes as her subject matter old rusty trucks, rag dolls, and other trappings of life that have a history and probably meant the world to the people who owned them for however long that interconnection lasted.

It's refreshing to see Mary creating on a regular basis again. For years her teaching took up most of her studio time. The art she was making during her long career centered on techniques she would be bringing to the students in her classroom. It is difficult to create a unified body of work when you are teaching everything from high school ceramics to college printmaking. During the past 25 years, her work has shown up as individual pastel drawings or photomontages regularly in group shows, but rarely has a collection of her art been consolidated in one place.

The rest of the rotating show space at Glass Growers is dedicated to the photography of Fran Rosiak, Mary's sister and best friend. Fran has also been a teacher all her adult life, but in the realm of science rather than art. She is fairly new to the creative process, but inexperience does not appear to have hampered her vision. Her photographs are well-composed and original. She has used several graphics programs to manipulate them in intriguing ways. She has made these photographs fresh and innovative, a difficult feat to accomplish in the overcrowded field of art photography.

Fran is also presenting us with subjects that hold meaning: Church buildings, statuary, stained glass windows, but somehow the deeper symbolism has been stripped away in favor of a more pure design aesthetic. Sacred objects presented more as architecture or swaths of color. It's interesting to compare the way the two sisters present similar themes. Despite the similar bright colors and subjects (many of these photographs are from the same locations), the vision presented to us as viewers from the two artists seem far removed from one another. Perhaps it is the digital manipulation that strips some of the intimacy from Fran's photographs. But perhaps instead it is her uncluttered composition and strong contrast. These images can be perceived and understood at a glance.

If you feel that this review really didn't take the artists to task, or was too "nice," take heart! I shall try with all dispatch to find a train-wreck of a show to pan for my next review!

In the meantime, a couple of fine visionaries are deserving of your time. Personally, (and yes, it is personal) I can't wait to see what the Rosiak sisters have in store now that they are both retired from education and can devote even more time to their art.