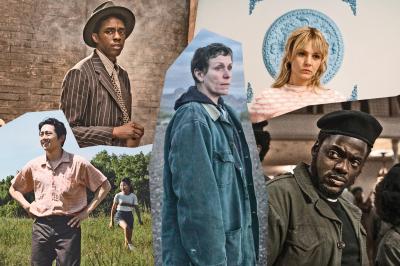 For being a "year without movies," 2020 gave us a lot of great movies. Thanks to streaming services, mid-budget character-driven dramas have dominated the conversation this past year with very little CGI spectacles taking the spotlight. It was also interesting to see all the smaller independent films released earlier in the year that remained part of the discussion. This combination made the possibilities of the 2021 awards season unpredictable and exciting.

And then most of the Oscar nominations went to the same middlebrow biopics and performance-heavy melodramas that always get rewarded by the Academy. There were a few surprises but the Oscars this year were most surprising in how unsurprising they were. That's not to say it's all bad. For instance, for the first time the Best Director category has two women nominated (Promising Young Woman's Emerald Fennell and Nomadland's Chloe Zhao) as well as two Asian directors (Minari's Lee Isaac Chung and Zhao again). Some of the acting slots favor younger, less established performers along with the older standard bearers.

For a categorically better picture of how interesting last year's film world looked, check out the nominee list for the 2021 Independent Spirit Awards. But we're here to make Oscar predictions, so let's dive into what the Academy might be thinking.

At the beginning of the season, this looked to be a two-way race between Mank and The Trial of the Chicago 7. Both films basically have "Best Picture contender" written all over them. At this point, however, it feels like both films have lost a lot of momentum to surprises like Nomadland, Minari, Promising Young Woman, and Sound of Metal. It's still a little too early to tell, but it seems like Nomadland is the one to beat.

Chloe Zhao has been winning everything in the Director categories so far and I don't think that will show any sign of stopping when the Oscars arrive. Emerald Fennell or Lee Isaac Chung could be an upset, but I don't think that's likely. Zhao will become the second woman and the third Asian director to win Best Director. I'm certain of that.

Chadwick Boseman's performance in Ma Rainey's Black Bottom is heartbreaking both in the film and knowing that it will be the last performance in a career tragically cut short. It's a certainty that the Academy will honor Boseman with the award, but I would like to take a moment to praise the other performances nominated, especially Riz Ahmed's devastating turn in Sound of Metal. This is a year where all the performances deserve some recognition but the prize will definitely go to Boseman. It's a great performance but I wish this one could have been more competitive.

If I was voting, Frances McDormand would take it easily, but her performance is not nearly as showy as Academy voters prefer, plus she's already a two-time winner. They will probably want to award a younger, less established talent and that will narrow it down to Andra Day in The United States v. Billie Holiday (showbiz drama = Oscar catnip) and Carey Mulligan in Promising Young Woman (strange, controversial horror/revenge film = wild card). This could really come down to the voters' own personal taste more than anything, and I think it may be the hardest one to make a prediction on.

I'm happy they were both nominated, but giving both Daniel Kaluuya and LaKeith Stanfield Supporting Actor nominations for Judas and the Black Messiah is ridiculous (if they're both supporting, who's the lead? The FBI?) Consequently, they could split the vote, allowing someone like Leslie Odom Jr. or Paul Raci to win instead. I'm happy Stanfield is nominated but this nomination is the worst instance of category fraud I've seen in quite some time. Anyway, I predict Kaluuya will win it.

Late last year everyone assumed this one was Glenn Close's to lose, but then everyone actually watched Hillbilly Elegy (spoiler alert: it's terrible) and now her nomination seems more like a formality. This leaves the category with no clear frontrunner and that always makes it more interesting. Both Olivia Colman and Amanda Seyfried did great work, but I'd like to see the more unexpected nominees of Youn Yuh-jung for Minari and especially Maria Bakalova for Borat Subsequent Moviefilm as the frontrunners. The Oscars are so rarely unpredictable and this race is as unpredictable as it gets!

It would have been nice to see something like First Cow or I'm Thinking of Ending Things in the Adapted Screenplay category, but it was not to be, so now I think all the momentum is behind Nomadland and it will win easily. Original Screenplay is a little more difficult. It seemed like Aaron Sorkin had it in the bag, but The Trial of the Chicago 7 has been lagging and Promising Young Woman has picked up speed. It's not a genre that the Academy usually rewards, plus its controversial ending has turned off a lot of audiences (including this writer). At the moment, though, it looks like it's the one to beat.