Checking in with Erie's transgender and gender-expansive community 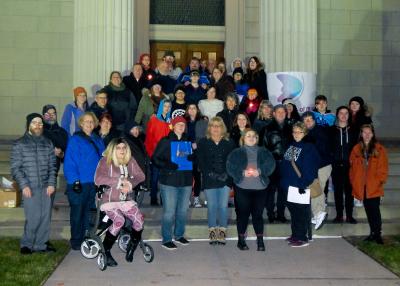 On November 20, more than 50 local people gathered on the steps of the Erie County Courthouse to pay their respects to the 36 people who had died during 2019 due to transphobic violence in our country. At the 7th annual Transgender Day of Remembrance Vigil in Erie, participants held candles and read short, sobering stories about those we have lost. Activist and social worker Caitlyn Strohmeyer stressed the urgent need for the gathering, noting that "media and law enforcement reports tend to erase us." The details surrounding the deaths were as chilling as the late-fall weather that accompanied the event.

It's a peculiar time for the transgender and gender-expansive community in Erie. At the vigil, a proclamation from the county executive's office was issued by Alex Whipple, who noted that "Erie County honors the bravery and resilience of the transgender individuals who live, work, or play in our county in their authentic gender." Earlier that week, Mayor Schember issued a proclamation officially recognizing November 12 through 19 as Transgender Awareness Week. All of this stands in sharp contrast to the actions of the Trump Administration, which revived the ban on transgender military service last January and is acting to roll back federal housing protections as I write. Adding distress, hate crimes in general hit a 16-year high in 2018, according to recent data from the FBI.

After the November vigil, the mood softened as participants relocated to the Crime Victim Center of Erie County for a reception. The event was hosted by TransFamily of Northwestern PA, a local group that allows transgender, gender-expansive, and gender-questioning people to find support. At the reception, I spoke with seven people about where we're at currently when it comes to the rights of our transgender, gender-expansive, and LGBTQ+ community.

Why we should be hopeful

According to TransFamily's president Annie Rosenthal, "the mayor has done a great job of informing the LGBTQ+ community through a steering committee." She also notes that "the City of Erie passed a conversion therapy ban, which we are now trying to work on getting passed countywide."

Rose Surma, a TransFamily member and parent to a transgender teen, notes the importance of local advocacy. "We have a few local social and support groups — the Northwest PA Pride Alliance, TransFamily of Northwest PA, and Greater Erie Alliance for Equality — and they're all holding events for education and advocacy," says Surma. "They're really getting their names out in the community so people know they have places to seek support."

Several people I spoke to championed Erie Pridefest, which began as an annual parade but has expanded into a multi-faceted, day-long celebration at the end of June. "Pride has been very good to us," says attendee Charles Connelly, who identifies as non-binary. "We had the best Pride this past year. The biggest gathering of people I've seen." The Erie Times-News estimated the number of this year's attendees at 2,500, with 700 actively participating in the annual parade.

Mike Mahler, a long-time LGBTQ+ activist and the co-editor of Erie Gay News, was able to crunch some numbers regarding our local successes: "The Human Rights Campaign has a municipal equality index. In 2017, we scored a 39 out of a possible 100. Erie's score is now up to a 75." To bring that number to 100 (which cities like Allentown, Philadelphia, and Pittsburgh were able to do), Human Rights Campaign suggests adding non-discrimination ordinances for city contractors, expanding domestic partnership benefits, creating a city-level youth bullying prevention policy, and establishing support networks for a variety of at-risk LGBTQ+ groups.

Where improvements are needed

As communications coordinator at the Crime Victim Center of Erie County, Deb Bartle is very concerned about housing issues for LGBTQ+ youth in our community. "Forty percent of LGBT youth run away because they're not accepted," according to Bartle. "Or they attempt — or succeed at — suicide. I've already lost one of my daughter's very good friends to that. And he came from a loving and supportive family, but it wasn't enough to overcome what he was facing."

Her sense of alarm is backed up by hard data. According to a peer-reviewed report from advocacy group True Colors United, "LGBTQ youth and young adults are 120 percent more likely to experience homelessness than their straight and cisgender peers." And the Department of Housing and Urban Development notes that "the number of transgender individuals who were homeless increased by 22 percent in 2018."

In 2015, the U.S. Transgender Survey was released, compiling data from 27,715 respondents from all 50 states. The survey found that, although 60 percent found their families generally supportive, 10 percent "reported that a family member was violent towards them because they were transgender, and eight percent were kicked out of the house because they were transgender." Forty percent reported attempting suicide at some point during their lifetime — that's nearly  nine times  higher than the national rate.

Nearly one-third of the survey's respondents were living in poverty and only 16 percent owned a home. Almost a third had experienced homelessness at some point, and one in eight had experienced it within the previous year. Twenty-six percent of respondents avoided homeless shelters for fear of being mistreated due to their gender identity. And seven out of 10 reported mistreatment while staying at a shelter.

To address these issues, Bartle has a very clear suggestion: "We don't have a Covenant House in Erie. The Covenant House is for runaway and lost queer youth who've been kicked out by their parents and their families. The closest one is in Philadelphia but it's too far away. We need a House here — we need to be protecting our kids." Bartle has heard first-hand accounts of unsafe conditions for LGBTQ+ youth at shelters in our community. She's quick to note the progress being made through organizations like Erie DAWN, SafeNet, and SafeJourney — as well as the resources generated through the Erie Community Foundation's LGBTQ fund. But she finds the Covenant House model necessary because "it's designed to be intersectional."

Healthcare is also a major concern for transgender and gender-expansive people. Surma notes that "for trans youth particularly, there are presently no doctors in the city of Erie who will treat anyone under the age of 16. So there's quite a few of us who have to take our kids to Pittsburgh or Cleveland for medical care."

Jewels Frantz, a student at McDowell Intermediate, would like greater local focus on education. "We do not have groups in schools, or a class even, about gender roles, gender identity, or sexuality," she says. "Kids and teenagers are trying to figure ourselves out without information. We don't know exactly where we fit in. We know 'lesbian, gay, bisexual, transgender, and queer' — but we don't really know beyond that. So we have to put ourselves in those five boxes — when there are hundreds of other boxes."

I asked a number of people at the reception what they might say to someone who is questioning their gender or sexuality in Erie. Victoria Taylor, an ally who was there to support her friends, claimed that "you definitely need a support system. One person, many people — it doesn't matter." Frantz suggested "joining support groups, and definitely talking to a therapist or a psychologist." Connelly urged patience: "Take your time. It's not a race. Seriously, I just came out as non-binary earlier this year and I'm still trying to figure out what it means to me. Just don't expect it to happen overnight." And Mahler expressed optimism: "The people who are around you may be more accepting than you expect, even when there's an initial negative reaction."

For those of us who simply want to support our transgender and gender-expansive community, Bartle has simple advice: "When you talk to trans and gender-non-conforming youth, all they want is acceptance and love, just like any other child. We're not talking about an unreasonable request here — we're talking about basic human dignity and love. Every single child deserves that. And if our community isn't willing to provide it, then our community isn't worth having."